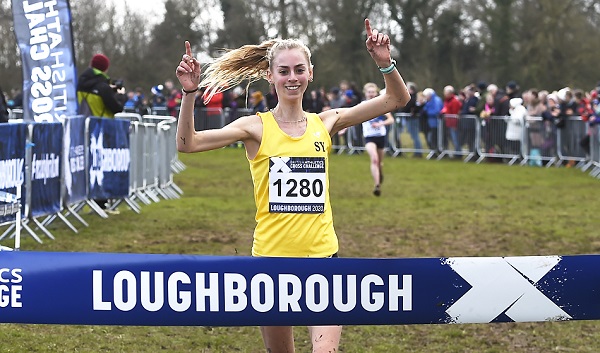 Clash of the champions at UK Inter-Counties Cross Country

The winners of the past two editions of the UK Inter-Counties Cross Country Championships men's race went toe to toe on Saturday (7 March) as under-23 prospect Charlotte Dannatt (pictured above) claimed her first senior title in sticky conditions at Loughborough.

Cross country is often referred to as grass roots athletics but the recent inclement weather has introduced a whole new lexicon to the sport. One experienced official described the surface at Loughborough to runABC South reporter Alan Newman as: "Claggy mud, not wet mud like the National", comparing conditions with the going at Nottingham two weeks ago.

That authoritative journal, Athletics Weekly, offered up the phrase: 'cloying mud', and the suction power of that odd mix of earth and water has played an unwelcome part in a few key races this season. No doubt that was in the mind of defending Inter-Counties champion Adam Hickey, representing Essex, as he shared the early pace with 2018 winner Mahamed Mahamed (Hampshire).

It was Hickey who had lost and later recovered a shoe in the National Cross Country, fighting back to finish fourth, but there were no such footwear issues at Loughborough as Mahamed forged a winning lead of 15 seconds over the Southend athlete after 11.2K of tough running. Ultra and trail running international Tom Evans (Sussex) completed an all-South podium but the team gold went to North East from Yorkshire and Sussex.

There were 293 men representing 30 complete county teams and the race also concluded the British Athletics Cross Challenge for 2019/20, with Mahamed the overall champion for the third successive winter.

The women's race, on the eve of International Women's Day, was held over the identical 11.2K course as the men raced and resulted in an exciting win by six seconds for Charlotte Dannatt (Surrey) from Jessica Gibbon (Oxfordshire) and Phillipa Williams (North East). Dannatt had been scheduled to compete in the World Universities Championships in Morocco but that event had been cancelled due to the Coronavirus outbreak.

Full results, including the junior races, are available at FR Systems here