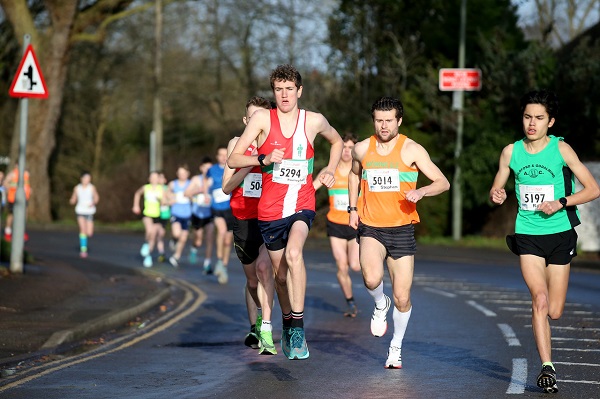 The 3,800 who finished the Mercer Surrey Half Marathon, 5K or Kids Run on Sunday (8 March) would have been blissfully unaware of the huge efforts made by the organisers to ensure the event could go ahead. The entire aat-events team was busy clearing floodwater from Clay Lane, Jacobs Well the day before, after more heavy rainfall had hit the South-East.

The terrific efforts paid off as the role of 'race sweeper' was redefined by officials on Saturday. And so the BARR Gold Standard Mercer Surrey Half Marathon ran as scheduled for the seventh time with 2,944 finishers in 3:31:46.

Up front was one of the ironmen of endurance running – Ben Cole (Tonbridge, 1:10:22) – who finished 21st in the UK Inter-Counties Cross Country Championships less than 24 hours earlier, competing for his native county of Kent. Cole was joined on the podium by Horsham Blue Star Harrier's Maxwell Dumbrell (1:10:55) and Alastair Cambell (Stroud, 1:11:12) – neither of whom had endured 12 muddy kilometres at Loughborough the previous day.

The supporting 5K (pictured above) was the race of the day as Ryan Symington (Poole), Stephen Blake (Woking) and Max Duckworth (Aldershot) sprinted across the finish line at Woking Leisure Centre together in 15:29/15:30. Showing no local favouritism, eagle-eyed judges placed the top three men in that order!

This has been officially declared the wettest February since records began in 1862 and race organisers have battled with the elements and the Coronavirus outbreak to keep the sport we all love going. Ironically, the sun shone throughout the races but the hard-working organisers were hammered by hailstones while packing up!

Perhaps it is timely to highlight efforts to tackle climate change through a new environmental policy adopted by Mercer Surrey Half Marathon, resulting in 10,000+ single use plastic bottles saved by using seaweed water capsules on course and runners managing their own water supply, plus recycling bins in the Event Village. Some competitors cycled to the race using bike racks on offer.