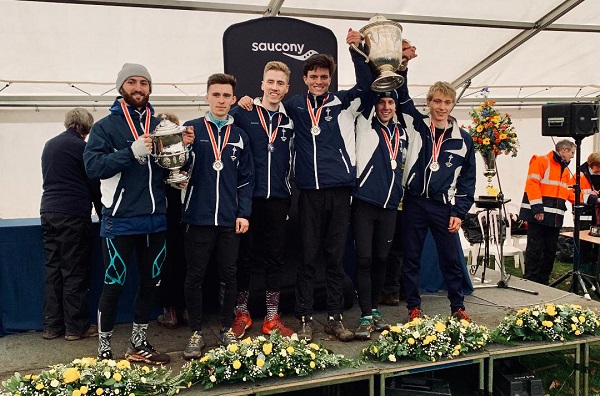 Clubs from the south dominated the Saucony-supported English National Cross Country Championships at Wollaton Park, Nottingham on Saturday (15 February), winning eight of the 10 individual titles available and a remarkable near clean sweep of all the team awards.

This was one of the muddiest 'Nationals' ever and strong winds also hampered the efforts of the 5,000 highly motivated and well-supported club athletes in action. Conditions could hardly have been in greater contrast to the glorious weather enjoyed at Leeds last year.

Leeds City AC were defending their team trophy in the 132nd senior men's race over 12K but it was the 2018 champions Tonbridge AC (pictured above) who returned to the top step of the rostrum, also claiming the unique nine-to-score trophy for good measure. Leeds were runners-up in the main team race and Bristol and West took bronze, plus silver at nine-to-score.

In a rare beacon of success for the north, Calum Johnson (Gateshead Harriers) – the Northern champion at Bedale last month – led a top three completed by Joe Steward (East Cheshire Harriers) and Linton Taylor (Leeds), leaving 2018 champion Adam Hickey (Southend) to rue his luck in fourth, having stopped to replace a shoe that had been peeled off by the glutinous surface. There were 1,710 finishers in 1:41:36.

There was the first ever Danish winner of the 87th English national in the women's race. Anna Emilie Møller, the European under-23 champion, was simply too strong for the domestic field. The St Mary's University student, representing Aldershot, finished 21 seconds ahead of Jess Judd (Blackburn Harriers). Bronwen Owen (Leeds City) and Jess Gibbon (Reading) picked up the remaining medals. Aldershot won the team contest from Leeds City and Highgate Harriers. There were 911 finishers in 1:13:34.

In the youngest age-group there was a triple success for South Buckinghamshire club Chiltern Harriers, with individual gold for under-13s Zoe Gilbody and Alden Collier and Zoe leading her club to further golden glory.

The only team title missed by southern clubs was the under-15 girls race, where Vale Royal AC in Cheshire raced to team gold.