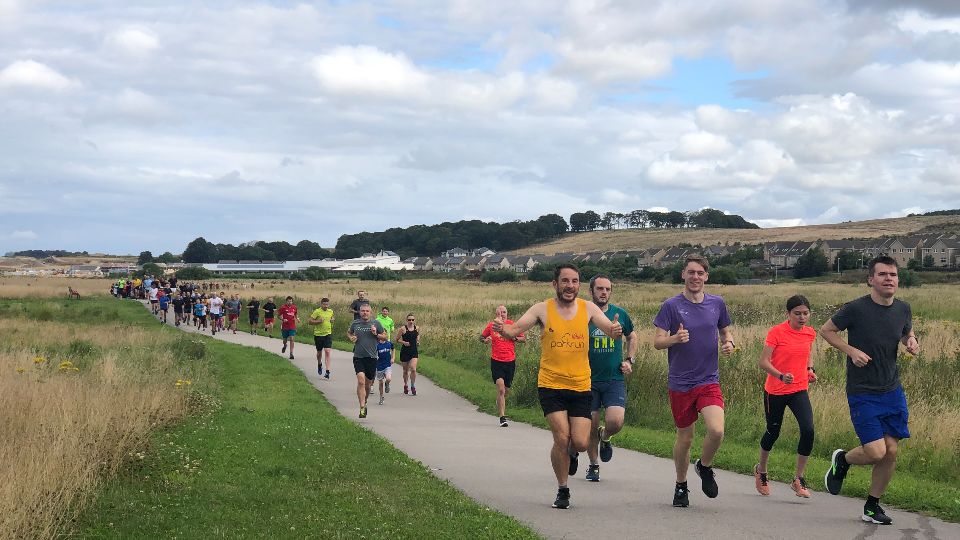 From Kirkwall to Wallaceneuk, thousands of Scots dug out their barcodes

The morning Scotland’s parkrunners had been waiting for finally came on Saturday, as the vast majority of the country’s 5k events resumed after a hiatus of nearly a year and a half.

As of the Friday before the restart, over 90% of the country’s parkruns had permission to resume.

Judging from the comments made on social media during the week, most regular parkrunners were looking forward once again to their 5k fix. Some, however, did express their continuing concern about gathering in large groups and announced they’d be putting off their return until later.

In the end, fears about Scottish parkruns being overwhelmed with runners didn’t materialise, just as they didn’t after England’s restart a few weeks ago. Many experienced lower than average turnouts, which suited many (understandably) rusty volunteers and nervous run directors just fine.

One of the events resuming was Aberdeenshire’s Ury Riverside, the local parkrun of runABC’s Christine. Before she assumed her duties managing the finish funnel, she took the opportunity to speak to runners and volunteers.

She tells us, “The word that kept coming up again and again was ‘excited’. Folk were excited to be running, excited to see their parkmates and excited that normal life seems to be one step closer. One was even excited to be volunteering at the first event as it meant she didn’t have to dust off the trainers and run!”

In terms of attendance, Christine noted that there was a very good mix of runners, with plenty of familiar faces, but lots of new ones asking where the start line was. “By my tally a third of this week’s runners were new to our event. Whether they’re new lockdown runners, new to parkrun or just new to our event we can’t say, but it’s great that they chose to join us.”

In terms of COVID safety, none of the runners Christine spoke to expressed any concerns about taking part in the run, which should be encouraging both for those who attended and those who have, for their own reasons, chosen not to return yet.

Speaking to runners after the event the mood was again positive, one said that "everything felt just like ‘old times’ except for one thing – the kids who used to come along 18 months ago have all grown and got so much quicker. With this week’s first female finisher a junior, they’re clearly the ones to beat now!”

“From a volunteer perspective, everything ran smoothly and the run director was very happy. The new barcode scanning procedures and app worked well, the times matched up and with around 150 runners on an average pre-Covid turnout of 180, we weren’t overwhelmed. We couldn’t have asked for more, really. Roll on next Saturday!”