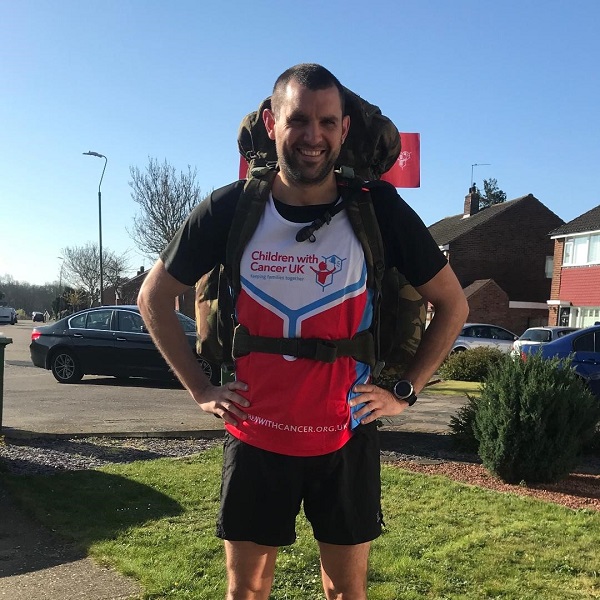 James Page became an internet star due to a 873-lap marathon in his Sidcup garden on 27 March. But unlike many other backyard athletes, James did not rest on his 'laurels' but sought new 'roots' for his subsequent challenges! runABC South recently caught up with the charity champion...

James' back garden marathon hit the social media sweet spot in the early days of the Coronavirus epidemic, partly due to his cheeky use of a few precious feet of toilet roll as an improvised finish line. James ran on a 48.3 metres grass loop for a 4 hour 57 minute time instead of lining up for two huge fundraising events, as he explained to runABC South:

“I was meant to be running the Marathon des Sables followed by London Marathon for Children with Cancer UK, but they were both postponed. This was a big blow as I’d trained for 11 months solid and put in so much training, money, effort and time away from the family and now had another 6 months to go. So, when we were put in lockdown, I decided to create my own challenges to stay active and keep up the fundraising. The charities have taken a big hit so I wanted to try and raise as much money and awareness as possible”.

The first challenge made over 150 press and media appearances and James was on a roll! He may have dispensed with the toilet paper finish but his challenges have gone to an impressive new level. Next up was a useful little stamina builder for Marathon des Sables – 15 miles with a 34lb Bergen military back pack in 2:33!

With the MdS run in the bag, James dropped the weighted pack and set off for a 32.6 mile ultra by running 137 loops of 0.24 miles round his local area in 5:04 – passing the marathon in a sub-4:00 PB en route. James described his planning and the local reaction as: “I set up an aid table with water, electrolytes and snacks and was amazed by people’s support and generosity as all the neighbours came out and cheered and clapped me on throughout from their front drives and I received even more donations”.

James' latest escapade, following clarification of the rules regarding multiple bouts of exercise, was the 4x4x48 hour challenge. This involved running four miles every four hours for 48 hours! James started at 6am on Saturday 2 May and then ran every four hours on the same 0.24 mile course around his neighbourhood. The numbers are as dizzying as the route taken: 52.77 miles; 236 laps; 11,589 calories; 88,924 steps in 7:18:57. James enjoyed this challenge the most as he said: “I really enjoyed this challenge as it was great to get my teeth into something and to raise more money for CWCUK. The 2.00am runs weren’t much fun and I only got about 2/3 hours sleep a night”.

So far, James Page's efforts have raised over £5,000 for Children with Cancer UK and further donations are welcome at Virgin Money Giving here