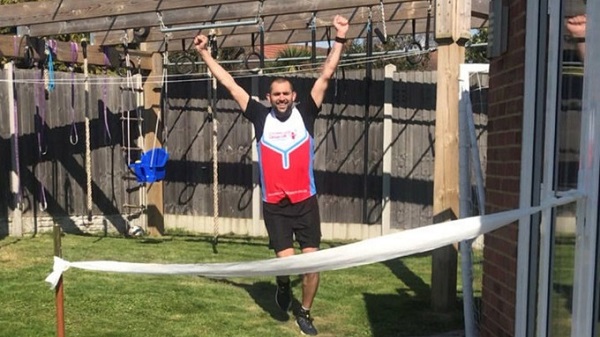 There's a story going round...

“My wife's not too happy”, said James Page, 36, a pipe-fitter from Sidcup, after his epic 873-lap marathon on a 48.3 metres loop, which left a scar on the lawn that will take a while to recover!

James probably isn't the first to have combined Government advice to stay at home with his 'grass roots' athletics and he certainly won't be the last, as we continue to adapt to the new normal during the Coronavirus pandemic. However, his story was the first to have made almost every national and local news channel and many newspapers.

Where James' story stands out was his humorous nod to some of the more selfish members of society who have been hoarding toilet paper, by using a length of the precious commodity as a finish line, prepared by his proud son. James posted a picture of his personal triumph – flushed with success, you might say – on his Facebook page and there was an immediate response from the world's media, desperate for good news stories to balance the present issues.

There have been some good-humoured comments regarding the amount of loo roll used in a crisis and this has simply added to the publicity gained, which has boosted James' donations to his Children with Cancer UK fundraising efforts to almost double his target of £2,000. You can add to the total at his Virgin Money Giving charity page here.

The idea came about when James' target events, the 40th Virgin Money London Marathon and 35th Marathon des Sables, were both postponed from April to the autumn. Although James still intends to run both events, he decided to put months of hard training to good use while raising vital funds for his chosen charity and the 'Sidcup Garden Marathon' has paid off in spades!

For the record, James ran 4:57 despite the tight turns, switching direction every 20 minutes to avoid injury, as he explains: “I wanted to go a bit quicker and get a personal best, but it’s hard to pick up speed as you’re running in such a small circle. I’m not the fastest runner, but I had to keep it at a nice comfortable speed, otherwise it would be tricky at the corners.”

James Page certainly has made a big impression, not least on his lawn where a clear trail has been left as a reminder of his magnificent solo effort.

Children with Cancer UK is organising the 'Together as One' run, set to take place on the original day of London Marathon, April 26.

James has sown the seed – or might have to, now the damage has been done!