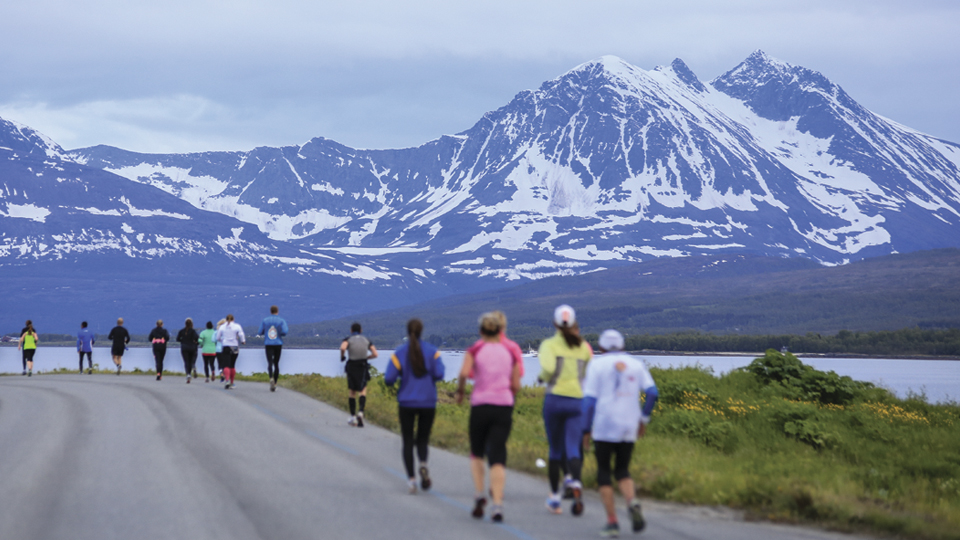 It’s less a case of Nordic Noir and more one of ‘Nordic phwoar!’ as runABC highlights the most enticing running events in Scandinavia…

In recent times, Brits have become fascinated with our Nordic neighbours through TV shows such as The Killing, The Bridge and Børgen. While running from murderers makes for great entertainment, the activity is best enjoyed at the various races in Scandinavia. We take a look at the top races on offer.

The Great North Run may be the biggest half marathon in the UK (and is rightly celebrated as such), but it doesn’t quite match its Swedish counterpart Gothenburg Half Marathon. First held in 1980, the race regularly boasts more than 62,000 participants.

The route starts and finishes in Slottskogen – a 137-acre park in the centre of the city. Participants are treated to an outstanding view of Gothenburg’s harbour as well as passing by the Älvsborg Bridge and Göta Älv River. The race is relatively flat with only a few undulations, so good news if you’re looking for a PB. Despite the event’s mammoth size, the Swedes’ slick organisation ensures the course isn’t too crowded.

While discussing Swedish races, it would be remiss not to mention Stockholm Marathon. The event is regularly highlighted as one of the world’s top marathons and with good reason. As an international runner, you won’t feel out of place with around 50% of participants coming from overseas. The race provides a great opportunity to see the city’s landmarks with the two-lap course taking in the Royal Park Djurgarden, the Royal Palace, City Hall, Royal Opera House, and Houses of Parliament before finishing in the 1912 Olympic Stadium.

Moving on to next-door neighbour Norway – a land where winter sports reign supreme thanks to the country’s abundance of glaciers and mountains. Running is by no means an afterthought for Norwegians, though, with some spectacular events on offer in breathtaking locations. Bergen in the southwest of the country has even earned the unofficial title of ‘the European capital of marathons’ thanks to the large number of 26.2-mile events it holds each year.

One of the benefits of being so far north of the equator is the prevalence of natural light in summer. In fact, for many places in Scandinavia the summer sun never sets. This allows events such as the Tromsø Midnight Sun Run to be held at, you guessed it, midnight.

Around 300 UK runners head to the Arctic city of Tromsø each year to take part in the most northerly marathon in the world. Race organiser Nils Haetta says that the race is less about fast times and more about enjoying the atmosphere: “People don’t come here expecting a personal best – it’s an experience race.”

Course highlights include the Arctic Cathedral – reminiscent of Sydney Opera House – and the Polaria Aquarium. The midnight-start means that by the time runners are on the bar-lined home stretch, spectators are in – to put it delicately – an advanced state of refreshment. Thankfully, this only adds to the atmosphere with spectators even more animated than usual!

As any fan of Børgen will tell you, it’s impossible to hear Denmark mentioned without thinking of its fashionable capital Copenhagen. The city plays host to a marathon in the spring and half marathon in the autumn, attracting around 12,000 and 25,000 runners respectively.

The marathon showcases the city’s various districts – the green Østerbro, the multi-cultural Nørrebro, and the ultra hip Vesterbro before finishing on Islands Brygge. The half marathon is in the privileged position of becoming the first event in the Nordic countries to be awarded the IAAF Road Race Bronze Label.

If completing a full marathon in one go seems a little too much for you, Etape Bornholm may have the answer. Held on the island of Bornholm in the Baltic Sea – the 26.2 miles are spread over five days. The race’s location is renowned for its natural beauty, including the promontory of Hammeren, and Almindingen – one of the largest forests in Denmark.

For those looking for home comforts Norway, Sweden and Denmark all have a number of parkrun events. Denmark has eight and counting having embraced the free weekly 5k following the launch of the country’s first event in by Jonathan Sydenham who fell in love with the concept while visiting the UK. And you’ll no doubt fall in love with running in Scandinavia when you take part in any of these races.