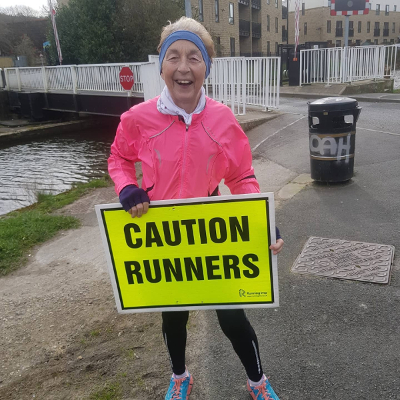 Hilary runs on to her 100th (virtual) marathon

Yorkshire’s own Hilary Wharam completed her 100th marathon albeit a virtual one along the Leeds to Liverpool canal in March. The pandemic and a recent injury didn’t stop the inspirational Horsforth Harriers from reaching her goal.

Hilary underwent shoulder replacement surgery in January this year and on 19 February was given the green light to run. A Run Leader for the Absolute Beginners Group at Horsforth Harriers and an inspiration for many she was on a mission to run 100 marathons before her 80th birthday and completed her 99th in November 2019.

She was due to run her 100th marathon at the Leeds and Liverpool Canal Canter (Day 1) organised by Its Grim Up North Running. But the coronavirus outbreak caused the event to be sidelined along with many others.

This indomitable lady was determined to run. On Saturday 21 March, she and a few other runners who kept two metres apart, completed an out and back course along the towpath that started and finished at Kirkstall. Hilary made the most of the day despite the circumstances saying: “As we can’t race together we will run and enjoy the route whilst social distancing.” John Walton presented her with a well-earned medal.

Her official 100th marathon will take place when the crisis is over and events re-open.