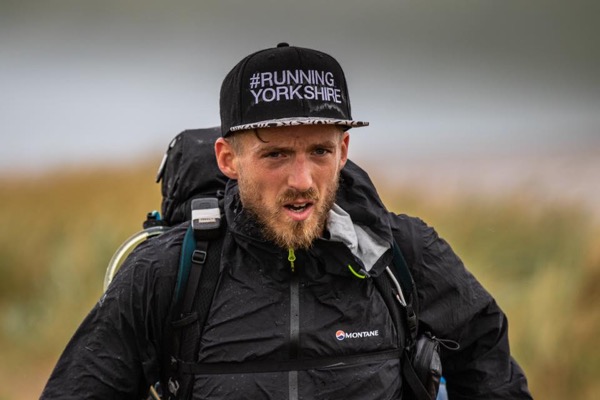 Ben Davis, who hit the headlines in 2018 with his 490 mile journey around Yorkshire, has confirmed he is setting up a new running club. As with his challenge last year, Ben’s aim is for the Early Bird Run Crew to raise awareness and help people with mental health issues.

Almost a year ago to the day, Ben completed his 18 day challenge, which included over 41,000 feet of ascent, covering the Cleveland Way, Yorkshire Dales, Humber Bridge and Spurn Point before returning to his start point at South in Scarborough. His exertions were so well received that he was named the Yorkshire Man of the Year.

Throughout his journey, Ben had been raising money for the charity Campaign Against Living Miserably (CALM), which is dedicated to preventing male suicide. His decision to take on the #RunningYorkshire challenge came after suffering a period of poor mental health.

It is his aim that the new club, which will be an informal affair and open to runners of all abilities, will continue with raising awareness of issues surrounding mental health. Ben furthered this by saying: “I'm really interested in how we can use running to build communities to support people with mental health issues.

“If people are suffering from loneliness or isolation, or mild depression or social anxiety, how can we use running to help people combat that? Because that's what I did.”

The Early Bird Crew meets at the Cenotaph in Harrogate at 6.00am every weekday morning (6.30am for a 5k run).