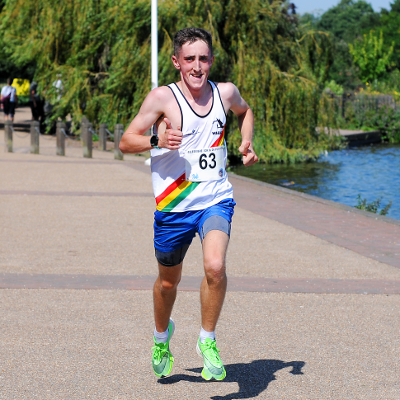 Jack Pickett won the fast and popular Ellesmere 10K (Sunday 25 August) for the second consecutive year after being on his own for the final 6k.

Over 800 runners braved the heat at the 10K and 2K Fun Run hosted by Oswestry Olympians and held in the scenic market town in North Shropshire. The town is known for its wetlands or ‘meres’ – nine in total – and Llangollen canal, with the latter part of the route complete with decorated narrowboats.

They set off at 11.15am from Lakelands Academy accompanied by clapping and cheering and followed a flattish course on a mix of road and trail with mild undulations. There was plenty of local support that included several residents spraying runners with hose pipes as they passed. That was welocmed by runners as it cooled them down on their way to the finish.

It was a commanding performance from the Wolverhampton & Bilston star Pickett who returned to defend his title on a sweltering Sunday. Jack got his bank holiday weekend off to a flying start, leading the race from 6k to win the 10k race for the second year in row in 32:37. Trevor Osborne of Dudley and Stourbridge Harriers was runner-up in 33:29 with Matthew McCormack of Crewe and Nantwich AC third in 34:11.

Kim Fawke of Lawley RC was equally dominant in the women’s race, winning in 38:35, nearly four minutes ahead of Alexandra Walkley who was second in 42:32. Jemma Brown of Shrewsbury AC was third in 42:52.

There was £100 prize for Jack and Kim, £50 for the runners-up and £25 for third. All finishers recieved medals and tech T-shirts along with water – much appreciated after a hot day’s running.