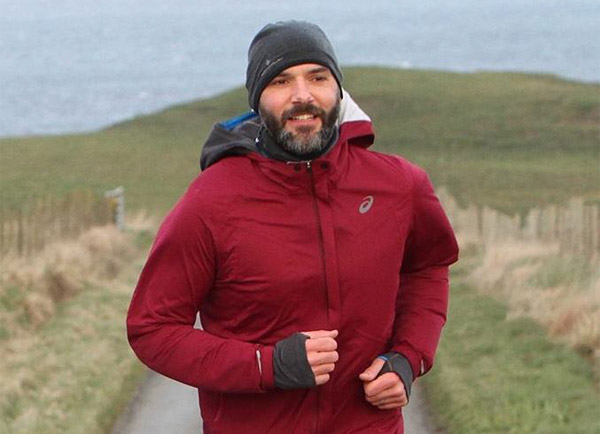 For most people, taking on a marathon a year is challenge enough. Not for Mark Calder. The Aberdeenshire-based runner is over two-thirds of the way through the challenge of running 14 pilgrimage routes across Scotland and the North of England in 2019.

The shortest of the routes he has planned is 45 miles; the longest, the 340 miles of St Ninian’s Way, he will run over several consecutive 50–75 mile days. In total Calder plans to run over 1700 miles to raise money and awareness about the even bigger challenge that Iraq’s Christians face as they try to rebuild their country after war.

runABC's Christine caught up with him as he headed into his 10th run: the 95 miles of the ‘St Drostan Run’ from Old Deer to Aberlour, through his hometown of Insch.


How are you feeling (physically, mentally, spiritually) heading into what is effectively your 10th ultra of the year, Mark?

I feel surprisingly well physically. Having good physio – Angela Walker in Insch – has certainly helped, but I've adapted a few things through the year, and moving to a structured run-walk method seems to have helped buy me energy late in long days of running. If anything it's made me a shade quicker too. I was worried about a steady deterioration physically but I've reluctantly done very little between ultras, as advised by experienced ultra-runner Mike Raffan, and it seems to have done the trick.

The mental side has been up and down, predictably. It's very different from running races where your whole focus can be on finishing. Here I'm also trying to connect what we're doing in Iraq to communities across Scotland and northern England which means a fair bit of extra admin and even church talks mid-run. In the end, though, the moments of intense despair after 20 hours on the road running into a headwind are much the same – and I've tried to use those really painful moments to reflect on the struggles of those we're trying to help in Iraq.

In terms of the spiritual side, I find the idea of running as a kind of wordless prayer a really fertile one. There's a sense of vulnerability when you're at your limit that has made me reach for God even in the felt absence of God. The lessons, which tend to be learned after the disorienting moments, have usually had something to do with patience, not rushing. Coming to see running with patience, or movement with stillness, as a value for both running and for life has been part of my learning this year.

Has everything gone to plan so far? Have you completed all the intended routes and miles, as far as possible?

Not losing a whole run to injury or illness is I think surprising, and very pleasing. I lost one day on my third run after rushing to get to Lindisfarne before safe crossing ended. I missed two meet-ups with my crew and ended up dehydrating. It was my own fault – and a huge, early lesson. While I made up a few miles in subsequent runs I then lost these when I shortened pilgrimage 8 as a precaution after developing shin splints in run 7. That means I'm around 40–50 miles behind my target. I'm torn at the moment as to whether I should make these up by doing an extra run, or whether embracing the 'wound' to my planned route is part of the lesson.

Is there anything you have been unprepared for (in terms of the actual running or routes or personal encounters)?

I expected to have a sense of achievement, but constantly bashing up against my limit – sometimes in very unpleasant ways – has been humbling if anything. Completing any of these pilgrimages is not like smashing my marathon PB at all – it's more of a kind of purging! That's not to say it's been negative – actually, there's something liberating about seeing oneself as tiny in relation to the extraordinary landscapes and histories in which my pilgrimages find their miniscule place. Again, this also stirs my sense of solidarity with those who've been forced from their homes and taken journeys of real agony against their will, and to admire the resilience that so many refugees show when given the opportunity to rebuild their lives.

I'm greatly indebted to my crew who have to put up with significant changes in my mood and well-being while doing the logistical bits and bobs that my tired brain can't manage. I've come to realise too that, while I enjoy the solitude sometimes, being encouraged by messages or in person en route really helps me. On one run around Arran, Gareth, my crew that sunny day, pulled up outside a beer garden and got all the drinkers to cheer me as I ran past. The boost that gave me provided literal pain relief! That's true of donors too. A small charity shop in Stonehaven managed to raise £8000 which is astounding, and seeing the time people have put into fundraising on my behalf is a real encouragement.

Doing these runs as pilgrimages adds another element too. Even when the solitude is difficult, I can imagine the saints on whose feast days I'm running, as somehow involved in the landscape through which I'm running, as not-entirely-imagined companions on the road.

Is there anything in particular you would like the readers of runABC to know about your challenge or the cause itself?

The main thing is that it feels like 'now or never' in northern Iraq. This is part of the world that has been characterised by pluralism for two thousand years or more and has been a heartland of communities which are now quite endangered in the region, including Yazidis and Syriac Christians. The past few decades have really threatened this coexistence however. If we can raise enough to support dozens of people through skills training and provide peacebuilding workshops in that region, promoting coexistence, I'm hopeful that we can play a small part in changing the ending of what has been a very bleak story.

The other thing I'd say is that the value of pilgrimage in this country has become apparent to me. It doesn't require signing up to anything; it just involves setting off on the road with an open heart. It's easier than I thought to join up paths across vast distances without having to slog along too many dangerous A-roads.

Do you feel running has been an effective way to raise awareness of your cause?

I think so. The connection of my running with ancient journeys and those of refugees in Iraq adds a rare resonance. At least, it's given me lots of time to reflect on the reasons for it and I don't regret anything, even the brutal, 'failure' days.

Mark’s next run – number 11 - will be in just over a fortnight’s time, as he tackles the ‘St Maelrubha run’: 110 miles from Applecross to Lewis/Harris via Skye.

TO SUPPORT MARK CALDER'S EFFORTD DONATE AT THE RUNNING HOME WEBSITE OR TEXT 'IRAQ' to 70660 TO DONATE £10.