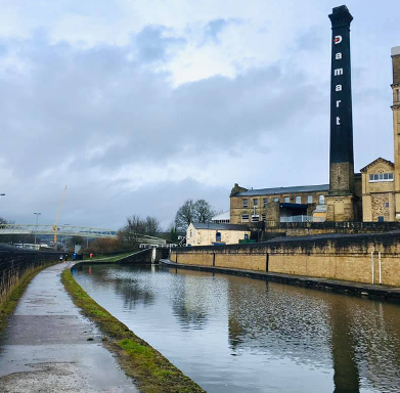 Runners lock on at Slawit Slog

There was nothing flat or easy about the route at yesteday's (Sunday 1 March) Slawit Slog even though it was held alongside a canal. Runners had locks, mud and a headwind to deal with but the famous cake table was waiting for them at the end.

The Huddersfield Narrow Gauge Canal was the location for the Slaithwaite or ‘Slawit’ Slog from Its Grim Up North Running (IGUN) who are known for their smoothly organised events, extra-helpful marshals and post-race goodies that include beer, chocolate and cake.

They are also known for their choice of distances that range from 5K to marathon and/or ultra that opens up their races to a wide range of people. These popular events attract a mixture of new and regular IGUN runners and this was no exception as participants were ready to tackle muddy towpaths, fields and cobbles and a few tunnels along the way.

There was a gradual climb towards Marsden and locks to ascend and descend that put paid to the idea that it would be an elevation-free event. The strong wind made it harder than usual and it was a slog through the mud yet the views were stunning and the friendly, supportive atmosphere kept everyone going up and down the canal.

As an example of this inclusivity; Carly-Jane Rees fell over and sustained cuts and bruises during her marathon yet she took the time to help another runner, Jennifer Creighton through the second half, running at her pace and encouraging her to the finish. This unselfish act showed the IGUN community at its best.

For future reference...it is easy to mispronounce Slaithwaite as the correct version is slawit’ or ‘slath-wait’ but never ‘slayth-wait’ as often assumed.