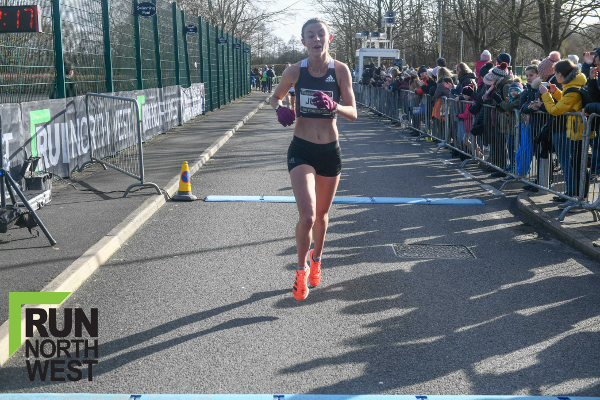 Blustery conditions made it that bit harder to bag a PB at Sunday’s (1 March) Trafford 10K even with the help of pacers but for elite athlete Jess Judd it was an added bonus following her close contest with Eilish McColgan.

The Trafford 10K is known for its fast and flat route that is a magnet for PB-chasers. However, this was a huge undertaking at Sunday’s race as the remnants of Storm Jorge caused a few people to rethink their goals. Windy weather aside, elites and club runners went all out for the top 10 places and prizes at this highly competitive event from Run North West.

Amongst the elite female athletes toeing the line were Jess Judd and Eilish McColgan with the latter looking to give her legs a spin after intense training sessions. There was also the women’s course record of 31:59 to aim for.

It was bright and cold as the runners waited to start on Chapel Lane, Partington. They streamed away at 9.30am along the single lap course towards Dunham Massey then turned around and headed back to Partington.

James Hunt of Cardiff AAC went up a gear to win the men's race in 29:44. Andy Davies of Stockport Harriers & AC took second place in 30:14 – only two seconds ahead of Hunt’s teammate Rowan Axe who was third in 30:16.

In the women’s race, Jess Judd of Blackburn Harriers & AC battled Eilish McColgan for the title. Judd raced through to win in 32:16 followed by McColgan in 32:25. Bronwen Owen of Leeds City AC was third in 33:30.

Participants had the option to buy a medal and t-shirt when entering the race and there were free images from Mick Hall Photos (part of the Run North West package).