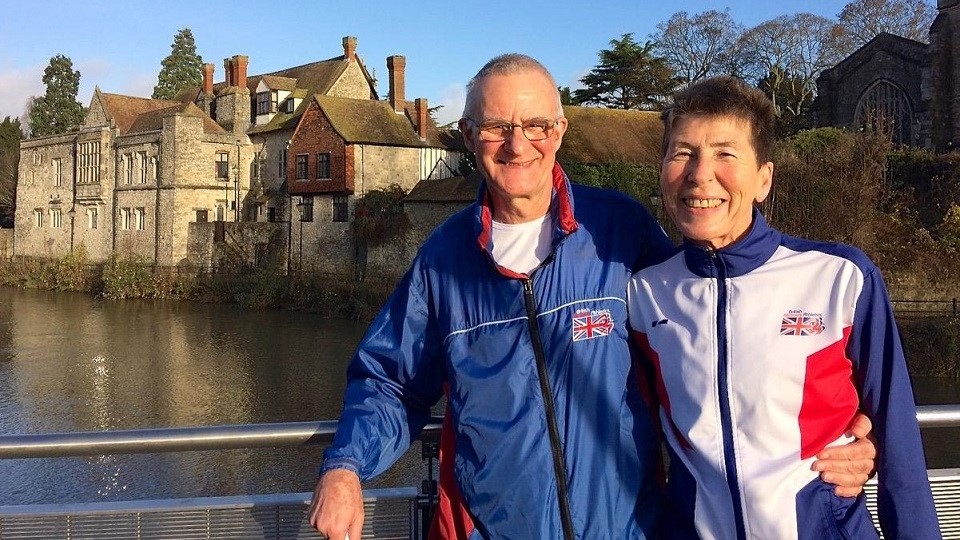 “We exchanged Garmins, rather than rings”!

“It's was all down to my mate Ron Hill”, said Sue James on a memorable 70th birthday last week as she married long-term partner Alan Newman on the same day, with the happy couple dressed in GB Masters kit! That statement does require some unpacking, so our reporter Alan takes up the story...

We met on 10 January 1990 on a running and racing holiday in Tunisia, with Ron Hill as the inspirational run leader. Alan travelled alone from Berkshire; Sue with a friend Jane from Lancashire. Within 24 hours Alan had tipped the waiter to arrange a move to Sue's table for meals, having immediately spotted his future wife – the best 'un Dinar' he has ever spent!

A wonderful week in Tunisia was followed by a long-running, long-distance relationship and six months later Alan took a leap of faith and moved to Blackpool with Sue. As is the nature with these things there was a twist and by January 1994 the couple had moved to Maidstone in Kent, where Alan continued his police career on promotion and Sue picked up her tailoring skills. Both now run with Tonbridge AC, where Alan is on the coaching staff.

Sue had also picked up her running pace and improved from a 90-minute 10K to 38:26, having only started at 40 years old! National veterans titles at 800m and cross country soon followed – the latter just six months after a hysterectomy due to a cancer diagnosis. They make 'em tough in Lancashire!

Many joyful overseas trips followed, representing GB Masters, where any medals won were secondary to having fun and forging lasting friendships through the spirit of competition. These days both still compete but have happily accepted roles as also-rans, although Sue's new W70 status does relight the fire in the belly with the new opportunities presented. That well-known phrase 'level playing field' springs to mind!

And so we come to Sue's unique 70th birthday celebrations. Having exchanged our first-ever Garmins (we don't do jewellery) it was on with our wedding attire of GB Masters running kit and off to the historic Archbishops Palace registry office (see image above) with our witnesses, Chris and Christine Gladwell – both members of Alan's running group at David Lloyd gym.

After a modern, COVID-secure ceremony, it was time for our honeymoon on the Med – actually a post-wedding 7K run on the River Medway towpath with our witnesses – and the 'reception', comprising takeaway coffees and mince pies kindly provided by David Lloyd! A perfect day for runners.

With impeccable timing, we had managed our nuptials just before Kent moved into new Tier 4 constraints that would have prevented even our minimalist choice of wedding arrangements. Phew!

It was a wonderful end to a pretty miserable year.