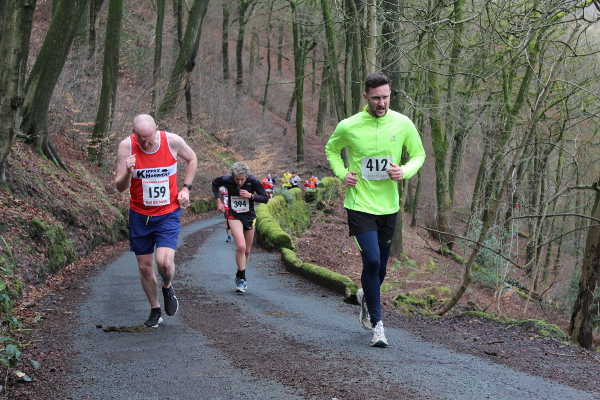 There were a greater number of entries this year at the Red Hot Toddy 10K (Sunday 8 March) and that helped raise funds for those affected by the recent floods in the area. Runners were equally keen to take on ‘that hill’...

The Red Hot Toddy 10K Road Race included a lung-busting, mile and a half climb although the long downhill to Bacup Road provided some respite for battered quads. It is one of several races organised by Todmorden Harriers and a popular one with runners looking to test their legs whilst enjoying the views of Stoodley Pike and the Pennines.

Children took part in the 1 Mile Fun Run at 10.15am in Centre Vale Park followed by the 10K at 11am. The runners completed two laps on tarmac around the Park before switching to a single, hilly lap on rural and urban roads. Then it was a case of digging in for the ascent up through the woods to Sourhall Road and Todmorden Edge followed by the 4km descent and back into town and the finish.

Callum Davidson of Blackburn Harriers was first across the line in 35:40 with Chris Ovenden of Skipton AC second in 36:23. Ovenden’s clubmate Julian Hood was third in 36:36.

Janine McGregor of Todmorden Harriers won the women’s race in 45:00. April Caufield of Halifax Harriers & AC was second in 45:57 and Mel Ives of Skipton AC third in 46:09.

There were 270 finishers. Spot prizes and hot toddies in the race HQ at Todmorden Cricket Club and all proceeds donated to the Calderdale Flood Fund.

The organisers would like to thank the Co-op for their donation of 250 bananas and water and Morrisons for the goody bags for the Fun Run.