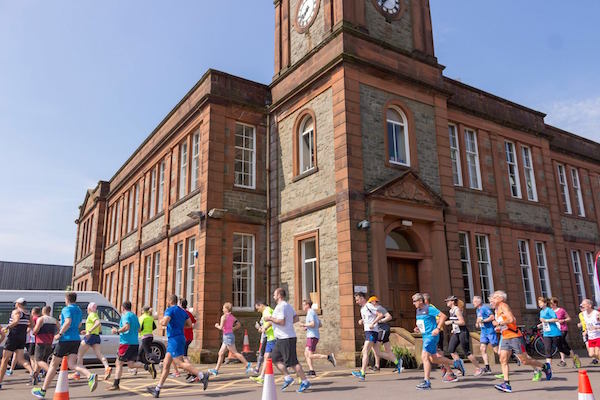 Something for everyone at Kirkcudbright Festival

Entries are now open for Kirkcudbright Academy Half Marathon, 10K and Walk (Saturday, 23 May) tempting families looking for an event with something for everyone to head to Scotland’s south coast.

Starting life as a half marathon in 1983 as a fundraiser for extra-curricular activities, equipment and projects for the pupils at Kirkcudbright Academy, the Dumfries & Galloway event has grown considerably in recent years.

Still the main race, the half marathon starts and finishes at Kirkcudbright Academy, taking in the scenic sights around Kirkcudbright town before heading out of town along the 'Beeches' road to complete a small loop around Twynholm.

From there, runners then proceed south to take in picturesque views of the Solway Estuary before heading back north beside Kirkcudbright Bay. The final stages head through the west side of the town to the finish line at the school.

The route of the 10K – which took the place of the 11.2km ‘Beeches Run’ in 2019 – follows that of the half marathon through the town at the start, but splits to head south along the west side of Kirkcudbright Bay. At 7km it turns around to head back into Kirkcudbright and the finish.

The 1.2 mile Fun Run is open to all primary school children and academy pupils up to S3.

There is also a half marathon distance walk.

All finishers will receive a memento on completing their event. Prizes will be given for both running events being men's and ladies first three finishers, plus first under 20; veteran 40; veteran 50 and veteran 60+. A men's and ladies team prize (for top three runners) will be awarded in the half marathon. Prizes are also available for the first local finishers.

If the entry limit has not been reached, late entries will be available on the day for a supplement to cover extra administration.

All proceeds from the event will go to Kirkcudbright Academy – and will be appreciated just as much as they have been for the past 37 years.