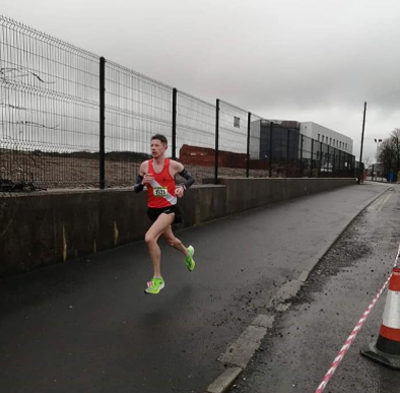 Pride for Mr Darcy at Lostock 6

‘Mel the Motivator’ got everyone ready to run at Sunday’s (23 February) Lostock 6 at an energetic pre-race warm up. There was plenty to smile about at this friendly road race particularly for Karl Darcy.

Darcy was amongst a field of over 450 runners at the sold out 38th Lostock 6 Road Race, sponsored by Scan Computers UK who also lent their name to the cow bell medals. Everything was on song, thanks to the hard work and planning by the host club, Lostock AC and that included the weather as the early morning rain cleared in time for Mel’s warm up at 9.45am.

There was a countdown from 10 to 1 before the airhorn sounded the start of the race at 10am. Away they went from Lynstock Way to follow an undulating route that took them through Wingates and Chew Moor, past Regents Park Golf Course and along Chorley New Road to the finish on Hall Lane. They were cheered by marshals every step of the way.

Laura Lombard of Bolton United Harriers won the women’s race in 35:07. She was followed by Dionne Allen of Leigh Harriers & AC in 36:11 with teammate Leah Peploe third in 36:20.

There were 457 finishers who received an acoustic cow bell medal that ended the event on a high note. For everyone involved it was indeed “6 miles of smiles”.