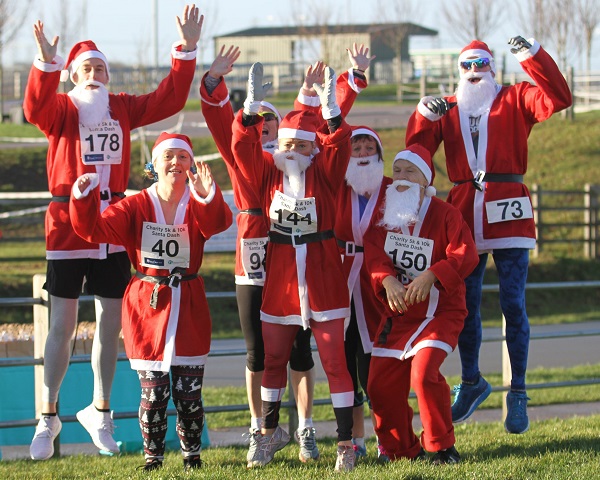 Could Sussex-based race promoters Nice Work be Britain's busiest and most prolific organiser of Santa Runs and other festive events? It seems quite likely, with more than 15 runs planned or already delivered, all with an unapologetic Christmas theme.

There is something truly magical about donning the Santa suit and joining family and friends for the joint enterprise of running a set distance, usually 5K or 10K, often while raising funds for a favourite cause.

The outfit adds colour and excitement to the spectacle and is a great leveller as both genders and all abilities look alike – at least until the gun goes! Then it's all flapping red and white material and flying fake whiskers as the real athletes emerge and try to get near their best times, despite being hampered by the obligatory clothing!

Although there are many claims and counter claims to the record for the largest Santa Run, the 2016 Virginia Beach (USA) Surf-n-Santa 5 miler is the generally acknowledged holder with 5,025 official finishers – after 191 Santa suit wearers were DQ'd for record purposes as they did not have all five pieces of the necessary attire (trousers, jacket, belt, hat and beard)! The above record is annually disputed by huge gatherings in Las Vegas and Liverpool.

There is more certainty regarding the Guinness World Record holders for Santa-suited marathons: Brian Lang (USA) ran 2:54:02 at Philadelphia Marathon in 2015 and Amy Smith ran Portsmouth Coastal Waterside Marathon in 3:43:20 in 2013 for the British claim to fame.

For a more realistic stepping stone towards a Santa record, or just to have some extra fun while indulging in your favourite pastime, check out the festive races on offer at Nice Work here.

A few examples include the 9th Southend Rudolph Run and Richmond Christmas 10K/5K (both this Sunday 8 December). The 14th Kent Christmas Cracker 5 Miler at Betteshanger Country Park and Gravesend Cyclopark 10K/5K Charity Santa Dash are both on Sunday 15 December. For those who leave things late the 14th Pett (near Hastings) Christmas Pudding Dash and Kings Hill Sports Park (near Maidstone) Christmas 10K/5K are on 21 December.

After that, it's time to feed the reindeer and load the sleigh for the real thing!