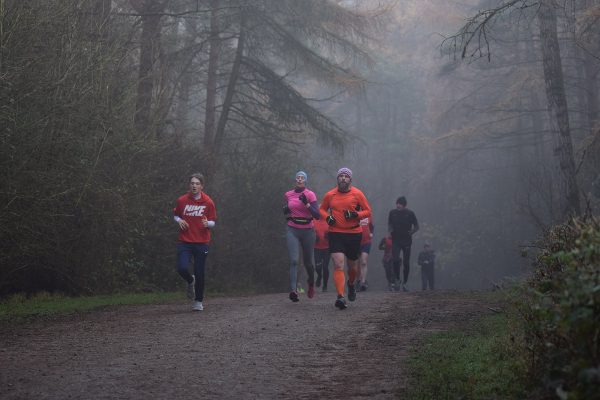 Last Saturday (30 November) was the fifth Irchester Country parkrun and this event is already in contention for an award for the most dramatic parkrun course especially in the early morning mist. After a measured start the new Northamptonshire run has grown in numbers and stature within a short space of time...

Irchester Country parkrun made its debut on the 2 November thanks to the combined efforts of the core team, supporters and organisations - the latter providing funding that enabled it to go ahead. The weather forecast was wet and windy for the inaugural but the autumn colours of the beautiful surroundings made up for the rain and 218 parkrunners enjoyed the event.

Since then people have travelled from near and far to experience this stunning location that balances conservation needs with tourism. The parkrun is held on a ‘lollipop’ shaped course consisting of hard trail paths with more than a few undulations. It starts in front of the railway museum and continues into the woods, passing a wooden sculpture on its way before winding back towards the finish on the Royal Meadow near the cafe.

A keen and green group from Eye Community Runners paid a visit on the 23 November for the fourth event as did James Constable who completed his 250th parkrun. Other milestones were reached including a 100 for Teresa Richards and a 50 for Joshua Shaw and Kirsty Hewitt.

Event number 5 was the ‘atmospheric one’ as 187 people and several dogs had a foggy run, jog or walk and there were 36 PBs. Thanks go to the 26 volunteers and all the others who have made this parkrun (and the other four) a success.

There is an extra parkrun on New Year’s Day at Irchester Country park starting at 8.30am.