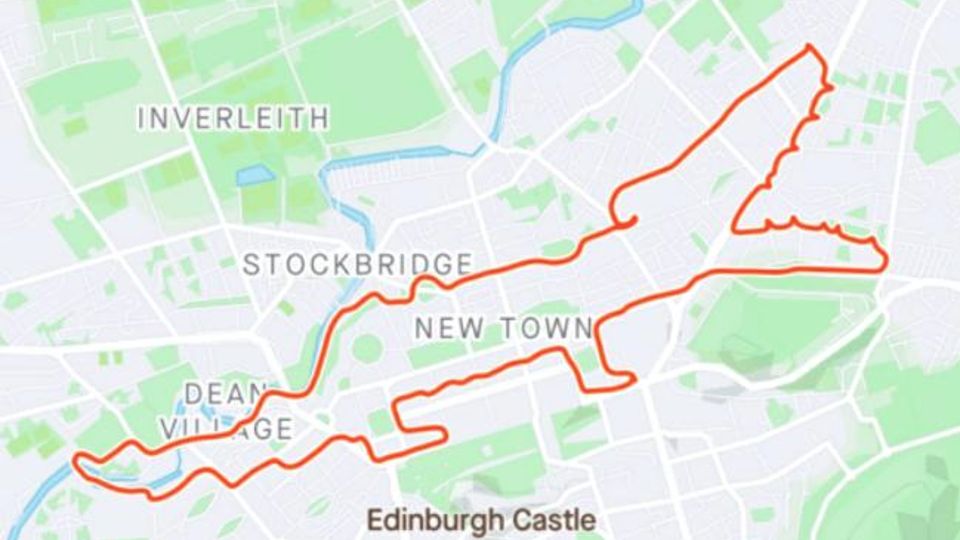 Edinburgh runner adds another animal to his ‘Strava art’ zoo

Edinburgh’s best-known Strava artist has been busy again, adding a crocodile to his collection of ‘Strava art’ animals. The runner, known only by his first name of 'Peter', called his latest creation ‘a snappy start to the new year’ on the Edinburgh Reddit, where he posts his work.

Complete with gaping jaws, sharp teeth created by running ‘for 20 seconds up a side road’ and a substantial tail, the 13km-long virtual beast joins the other animals in Peter's Strava zoo: a snail, a giraffe, a unicorn and Rudolph himself. Peter, who goes by the handle chemicalmusician on Reddit, has also, quite fittingly, created a Strava treble clef.

When asked how he plans out his designs, Peter explained: ‘My process is to think of an animal I'd like to run, then look and see if I can find it on the map. Then tweak it until I'm happy with the look.’ The runner then plans the route on Google and ‘onthegomap’ – and hits the road.

Peter, who only made running ‘a regular part of his life in 2017’, told the Edinburgh Evening News: “If there are bits that I'm uncertain on, or places I think I'm likely to mess up, then I'll incorporate it into a reccy run.”

Strava art is a creative process. “Both the unicorn and the giraffe were revised several times, and the number of spots and their locations changed on the giraffe,” he explained. “People especially seem to like that the giraffe has spots.”

But as with all matters of property, location is everything – especially for his giraffe. “I did think about putting spots in the body, but the roads in the Grange weren't so accommodating as those in Newington.

“The three smallest spots are loops of St Patrick's Square, Nicholson Square and that small loop of road at the end of West Crosscauseway. Running a loop around them feels a bit silly, but not as silly as doing the horns of the giraffe did! I must have ran past the same man four times. I don't know what he must have thought of me.”

With a festive reindeer appearing on the map in December and last week’s croc creation, lockdown doesn’t seem to be holding the Strava artist back: “I think everything I've done is within the rules. I've always gone to and from home, and all of the crocodile is within five miles of home.”

With restrictions extended for another few weeks today, perhaps the people of Edinburgh will see more animals appear on their streets soon – as well as more of the mysterious man running for a few seconds up their streets, turning back, running in small circles, and doing it all over again a few metres away.