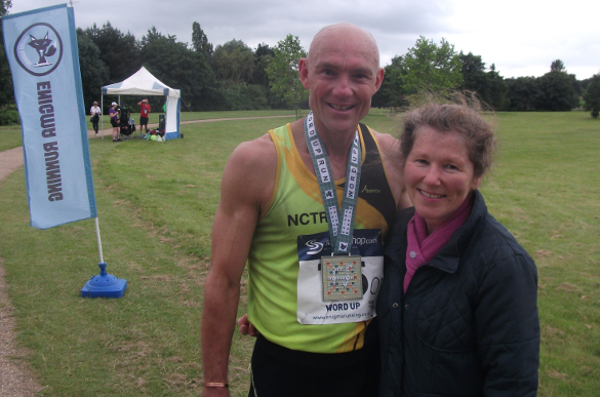 Steve Edwards reached a landmark World Record total of 750 sub 3:30 marathons at yesterday's (Sunday 17 June) Word Up Marathon in Milton Keynes. He finished in 3:21:53 (first V55) at this board game inspired event from Enigma Running.

The ‘Man Inside The Machine’ shows no sign of stopping. He aims to run 1,000 marathons in the fastest average finishing time with Sunday’s race a milestone on his record breaking journey. The Cotswold athlete has run 827 official marathons to date and in an average 3:18:28 which he hopes to maintain as he nears his target.

Steve has run marathons for over 30 years and has never posted a DNF although he has come close to doing so on a few occasions. He credits his longevity to a consistent, structured training regime including cycling, strength and conditioning and core work six days a week – not an easy task when balancing this with a full time job and family. Age is another factor as Steve admits, saying: “it seems to be getting tougher each time not just physically but also mentally, trying to recover and stay fit and healthy which isn’t easy when you’re not getting any younger!”

His wife Teresa is the other half of ‘Team Edwards’; she understands and fully supports Steve’s marathon ambitions, enabling him to achieve his mammoth goals.

The Enigma Word Up Marathon and Half Marathon took place on the 16 and 17 June at Caldecotte Lake in Milton Keynes. Runners completed 7.5 laps around the lake in a clockwise direction or anti-clockwise on the Sunday. The event was held in accordance with 100 Marathon club rules, an important factor for anyone looking to reach their own milestones.