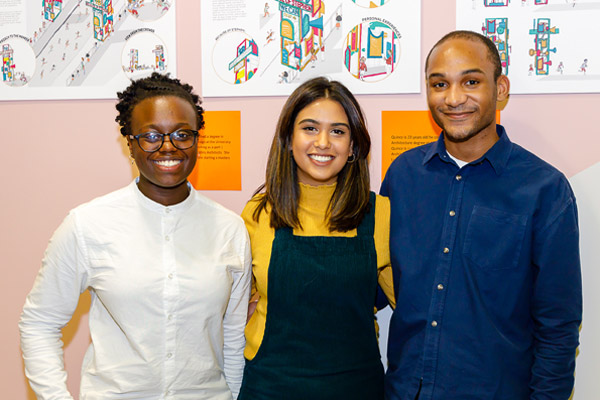 The Stephen Lawrence Charitable Trust and London Marathon Events Ltd have launched a competition for aspiring young architects to design a new mile-marker structure that will be used at every one of the 26 miles on the iconic Virgin Money London Marathon course.

This new competition builds on the success of last year’s initiative to design the Mile 18 Marker, in honour of Stephen Lawrence. The chance to create a brand new design of mile marker provides a unique opportunity for aspiring architects to inspire thousands of runners and have their work reach an audience of millions worldwide.

The mile markers are an integral part of the race, enabling runners to track their distance and time as they complete the world’s greatest marathon. The current scaffold tower structures have been in use for a number of years and the competition is looking for a new design that will need to provide information and inspiration, as well as being sustainable, and easy to install and remove.

The competition was launched on Stephen Lawrence’s birthday (13 September) and applicants will be able to register individually or in teams of up to four. The winning team’s design will be showcased at the 40th London Marathon on Sunday 26 April 2020.

Not only was Stephen Lawrence a talented runner, who competed in the Mini London Marathon, but he aspired to become an architect. The competition complements the Trust’s work supporting young people from disadvantaged and under-represented backgrounds to enter the career he loved, as well as raising the profile of its wider work supporting young people to enter and succeed in the career of their choice.

Last year’s Mile 18 Marker competition was won by three recent graduates on their journey to become qualified architects – Ayanna Blair-Ford, Shreeya Radia and Quincy Haynes. Their winning concept ‘Because of Stephen we can’ was designed to motivate runners at one of the toughest sections of the course and incorporated brightly coloured plaques with quotes from young people describing the personal impact that Stephen Lawrence’s life and legacy has had on them.

The 2020 Virgin Money London Marathon will take place on Sunday 26 April, shortly after Stephen Lawrence Day on Wednesday 22 April – a celebration of his life and an opportunity to learn from his story. The redesigned mile markers will not only be there to inspire the many runners on the day, but in particular those running for Stephen’s Team, who will be raising much needed funds for the Trust.