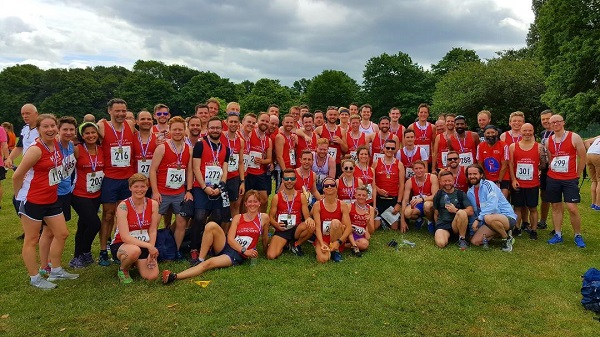 On the front foot with London Frontrunners

London Frontrunners, like so many UK running clubs, are preparing for another busy winter season of cross country and road races. runABC South reporter Alan Newman caught up with Europe's first and biggest LGBT+ community running club, with 500 members and growing.

When did you form your club? What or who was the original inspiration?

The very first Frontrunners club was started in San Francisco in 1974 by Jack Baker and Gardner Pond. London Frontrunners was established in 1995 and we are the first European strand of the club. There are now Frontrunners clubs all round the globe, with two things in common – a love of running and a safe space for the LGBT+ community in sport.

What sort of welcome can new runners expect?

New runners are greeted on arrival and are given a running buddy for their first run at a pace suited to them. The circle leader will introduce them to the rest of the group so the club can give them a welcome and a cheer! From the get go, new members are encouraged to join in the social meet-ups which are booked at re-occurring venues after each of our training runs. There is a sense of being welcomed into a social and running family.

What is your membership now?

At over 500 members we are the largest Frontrunners club in Europe and are growing every month! We're always keen to attract new members from across the LGBT+ community and beyond, regardless of sexual orientation, and we provide a safe environment for people to improve their physical and mental wellbeing. Many of our members have made lifelong friends and even met their partners at the club. There has been more than one LFR wedding!

What are your greatest competitive achievements to date?

We measure this in so many ways. Inclusivity is at the forefront of our ethos. LFR receives a number of club places for London Marathon and this enables us to give places to selected members every year, based upon commitment and input to the club. We see members who were new to running complete their first marathon through the support of the club and its members. That sort of achievement is immeasurable to us. Whether it be someone taking part in their first parkrun, ultramarathon or Iron Man, we celebrate them all equally.

Are you being a bit modest there? I believe your veterans have won a few awards?

You are right. Our veterans retained the team prize at this year’s gruelling Green Belt Relay, which is one of the main events for our club. At the recent Gay Games in Paris, which saw LGBT athletes from all over the world compete, our members came back with a hoard of medals (including 6 gold) across half marathon, 10k, 5k, triathlon and track events.

Our second international trip took place in 2012, when 80 LFR runners travelled to Italy to compete in a 14km trail race through beautiful Tuscan countryside. It was a stunning race through vineyards and hamlets throughout the municipality of Castelnuovo Berardenga.

On race day we all headed over to the race HQ, which was in a small village with a population of 400 people. They were clearly expecting us and the welcome was overwhelming. They couldn’t believe 80 runners had come all the way from London to their tiny village to run their race. They also seemed quite excited that we were also all members of an LGBT+ running club. Older members of the community would come up to us and ask: “Are you one of the gays from London”. On acknowledgement, we would be greeted with a handshake or a kiss on the cheek. One old lady called out to her friends in the shop next door: “These are the gays from London, come on over”!

The race was followed by a huge pasta party in the square where we were given unlimited food made by the local people, accompanied by equally unlimited bottles of red wine from the nearby vineyard. Just before we left the mayor and the race director presented us with a commemorative ceramic plate that had been crafted and hand painted by the local potter especially for us, along with a few more cases of wine for our evening back at the villa.

It was an event where we, as an LGBT+ running club, were hugely welcomed by strangers within a rather isolated community for being guest runners, whilst fully embracing our sexuality. As LFR members, we were so heartened by their gestures and proud to be able to represent not just a British running club competing abroad but one that also raised the profile of LGBT+ runners and the wider community. We still get invites from the race organiser to return. Who knows, one day we might just do that and go and see old friends.

Finally, if you had to summarise your club in three words, what would they be?

London Frontrunners is an inclusive and supportive running club for LGBT+ runners from speedy athletes to joggers, with a fun social side. If you would like more information you can visit the club website here