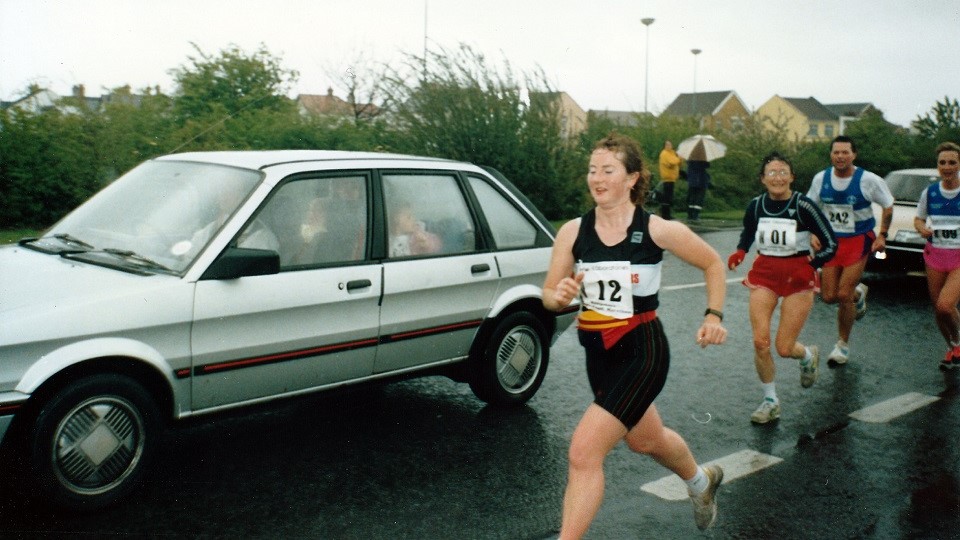 runABC South is sad to report the loss of one of the great warriors of British distance running. Josie Waller died peacefully on 11 December 2020, aged 98. Following a brain aneurysm in June 2019, Josie was admitted to a care home at Brambledown, having retired to Devon after a stellar running career.

Josie was a late starter, taking up running aged 62 to help her son Howard with his own health and fitness after he was diagnosed with asthma. Clearly, there was a latent talent that was nurtured when she joined her local club, Watford Joggers.

The smiling Josie started demolishing British age-group records and discovered a remarkable level of stamina, having had such little endurance background. It wasn't long before she was running remarkable times for the marathon and even showed a penchant for enduring the monotony of one-hour track races.

Domestically, Josie unintentionally entered the 1998 London Marathon and set a W65 record with 3:35:49. Apparently, she bought a ticket for the club's annual raffle for London places and was asked to make the draw. When she pulled out her own ticket she wanted to replace it but was persuaded to take part by fellow club members!

Many marathons followed in Japan, the USA, and Europe as well as in London and elsewhere in the UK. Her finest moment came in 1992 at the Gosport Marathon, on a wet and miserable day. Josie entered Gosport rather than London that year as it was a week later and just after her 70th birthday. Josie, pictured above wearing number 01, became the first woman over 70 to run a marathon in under four hours (3:52:00) which she improved to 3:49:02 at London in 1993.

After retiring to Devon in '92 she became Club Secretary and later President of Teignbridge Trotters and was awarded life membership in honour of her services to the club. Josie had a triple heart bypass in 2000 and ran her last marathon, aged 82, in 2004. Josie Waller's wider contribution to the sport was recognised when she was selected to run a leg in the 2012 London Olympic Torch Relay.

Josie Waller was interviewed for 'The Trotter' in April 2011 here