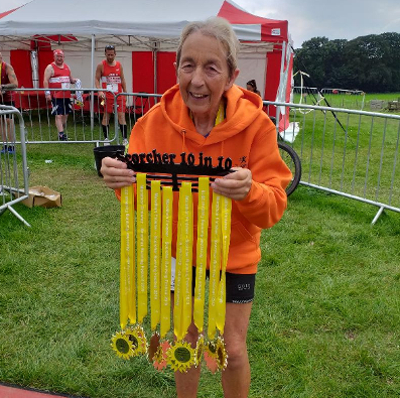 78-year old Hilary Wharam doesn’t let age stop her from taking on an endurance challenge and a ‘can do’ mentality has seen her complete 99 marathons to date. She plans to run her 100th before her 80th birthday.

A long standing and well-liked member of Horsforth Harriers, Hilary Wharam is something of a legend in the Yorkshire running community and known for her positivity as well as her achievements. She always encourages a fellow runner irrespective of their age or experience and strongly believes in mind over matter.

Hilary is keen to put back into the sport and together with Jamie Stewart, leads the Absolute Beginners Running Group within her club. Her down to earth attitude coupled with a love of the sport has endeared her to many and she continues to inspire.

A latecomer to running, Hilary didn’t pull on a pair of trainers until the age of 53 and only to maintain fitness for cycling. However, she was hooked after coming first in her age category in a race and never looked back, joining Horsforth Harriers then four years later, finishing her first marathon (London) in 4:04. She has now run London Marathon 14 times.

More marathons followed. Hilary Wharam took part in the Scorcher 10 in 10 (26 July to 4 August) organised by Time2Run Events. She is waiting to see if her Guinness World Record attempt to become the oldest female to run 10 marathons in 10 days will be approved after sending proof of completion. Her marathon tally stands at 99 with the aim of completing 100 before she turns 80.

Hilary has a few words of advice for anyone who thinks they are too old/slow/unfit: “Put your mind to it and you can do anything at all.”