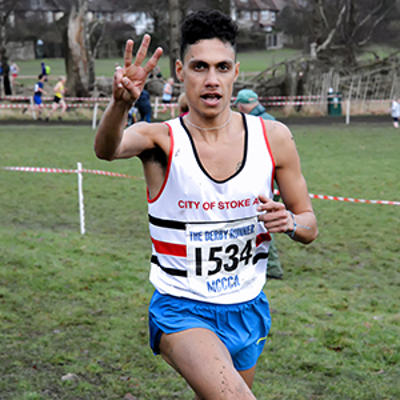 It was three in a row for Alex Brecker, and Katie Holt’s first title, at the Derby Runner Midlands Counties Cross Country Championships on Saturday (27 January). And the triumphant pair weren’t the only City of Stoke AC athletes in the spotlight.

Hills, mud and even more mud was the order of the day at Wollaton Park, Nottingham for this area championships. Competition was fierce as the event, along with the National Cross Country Championships, will be used to choose U20s and senior teams for the Home Countries International in March.

Alex Brecker won the senior men’s race for the third year in succession, crossing the line in 40:09 after a hard fought battle with Jack Gray. Gray of Cambridge & Coleridge AC was second in 40:36 with over half a minute between him and Danny Hallam of Wreake & Soar Valley AC - third in 40:58.

Katie Holt continued her winning ways with victory in the senior women’s race. She finished in 30:00 and claimed her first Midlands Counties title after coming runner-up the previous two years. Juliet Potter of Charnwood AC was second in 30:13 beating her sister Jane into third place in 31:02.

Charnwood AC had a successful day with their teams winning the U15 boys, U17 women, U17 men, U20 men and senior women categories.

The Midlands Counties Road & Cross Country Association thanked everyone who took part last Saturday. Next year’s event will be held at Leamington Spa.