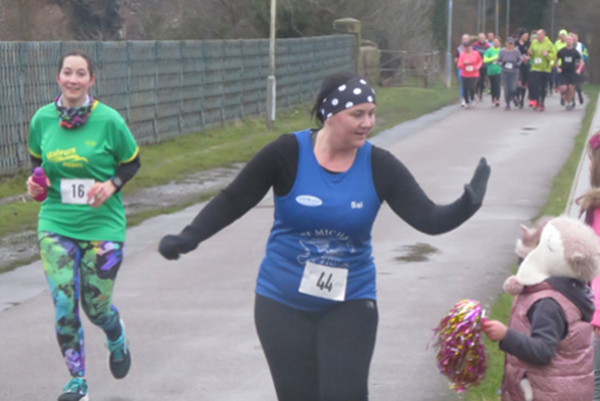 A public-spirited group of runners continued their year-long challenge at Saturday’s (27 January) Hereford Winter 10K but there are still 11 months to go for Darren Gibbons and his intrepid crew.

The 12 in 12 Runathon was created to raise funds for St Michael’s Hospice and the group have invited others to join them on their quest irrespective of age or ability. The aim is to complete 12 organised events in 2018 ranging from 5ks to ultras with mudrun permitted too! There is an equivalent version for juniors called 12 in 12 KIDZ which is suitable for children from nursery through to senior school. In both cases the goal is to get fit and have fun during this challenge while helping a worthwhile cause.

They were amongst the 113 runners who headed off at 9am on a damp, mild morning along an attractive and mainly flat course (apart from one hill). One of several races from Stride Out Events, it followed the same route as the Autumn 10K with a bespoke medal and refreshments at the finish.

Richard Hoult was the highest placed of the 12 in 12 Runathoners, crossing the line in 51:17.