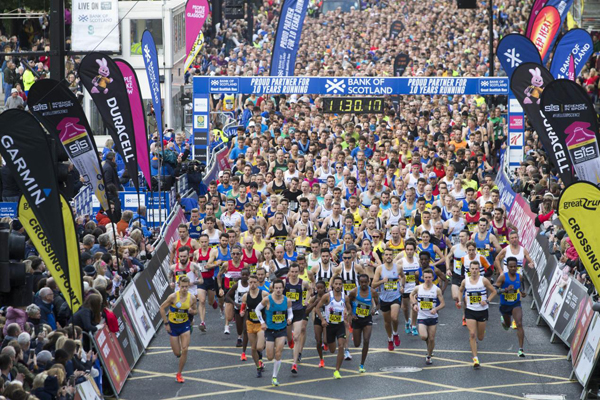 Thousands of runners took to the streets of Glasgow yesterday at Great Scottish Run 2018. The half marathon and 10k races both saw fields of elite athletes compete along side club, recreational and charity runners.

Conditions were tough in the feature half marathon where runners battled strong easterly winds as they headed west for the scenic parkland stages.

Spectators cheered on Chris Thompson who claimed victory in the men's race. The 37-year-old repeated his success of 2017 with a bold and fluid display of front running. Thompson broke away from home favourite Luke Traynor and Marcin Chabowski at around five miles and after that never looked likely to be caught. His winning time of 1:02:07 was 37 seconds faster then last year.

Polish visitor Chabowski (1:02:24) battled bravely and was delighted with his second place while Luke Traynor (1:02:56) must be pleased with his podium place and the confirmation of his arrival at the top table of UK distance running.

Mare Dibaba was a clear winner in the women's race. The diminutive Ethiopian broke the tape on 1:09:15 ahead of Rose Chelimo (1:10:07) and American Alia Gray (1:13:32). Shettleston Harrier Fionnuala Ross was 15 seconds quicker than in 2017 but had to settle for fourth place.

Thousands of recreational runners enjoyed their big race day despite the difficult conditions. They were inspired by the regular music blasts and charity cheering points plus the support of enthusiastic Glaswegians around the course. The Macmillan teams at the final bridge crossing and at 12 miles were doing sterling work and their inspirational samba band plus the following wind would have helped many runners in the tough final stages.