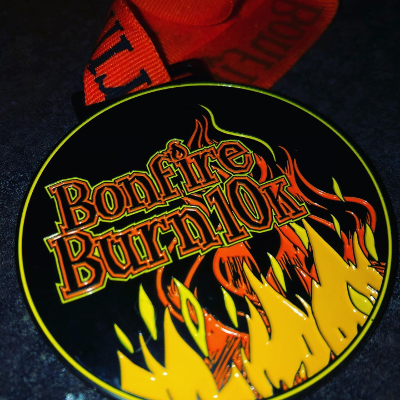 There were no damp squibs at Sunday’s (3 November) Bonfire Burn 10K as nearly 900 runners blazed their way around for charity. This was community spirit in action...

Now in its 9th year and a late autumn favourite with many runners, the Bonfire Burn 10K went with a bang at the Histon & Impington Recreation Ground, Cambridge. The weather was dry and mild and there was a palpable sense of excitement ahead of this popular event organised by The Friends of Histon & Impington Recreation Ground and supported by HI Runners.

The Histon Salvation Army, Impington band was playing as runners arrived at the venue before making their way to Station Road for a staggered start to minimise congestion. There were four waves with the sub-45 minute runners setting off at 10.30am followed by the other three waves at 10.33am, 10.36am and 10.39am.

They followed a multi-terrain course on country roads and muddy tracks that passed along the northern edge of Cambridge that included the Guided Bus Bridleway and the Science Park. Marshals and residents applauded the runners as they continued on their way before finishing at the Recreation Ground.

There was a comprehensive win for Georgina Schwiening in the women’s race; she crossed the line in 34:37 and over seven minutes ahead of Becky Wright who was second in 41:38. Rachel Porter came third in 42:11.

There was a fiery medal for every finisher, a drink and a banana with refreshments available at the Recreation Ground Centre. Sizzling good run...