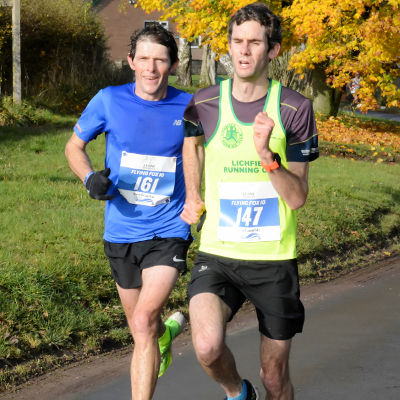 It was a hard fought battle between Craig Pilsbury and Matthew Orford at the Flying Fox 10 yesterday (Sunday 3 November). Pilsbury was the winner after a last gasp dash towards the finish.

Organised by Stone MM, the Flying Fox 10 always lives up to expectations and Sunday’s race didn’t disappoint as a strong field competed for placings and points. The sun shone too making it the perfect end to another successful season for the North Staffordshire Road Running Association (NSRRA).

There was a course alteration this year: in previous years, runners had to walk half a mile to the start but the organisers changed this, moving the start line to outside the Race HQ at All Saints First School, Standon. The route was two laps and undulating in scenic countryside, passing the Race HQ for the second time before rejoining the old course then finishing outside the school.

Craig Pilsbury was single-minded from the outset; setting a quick pace at the head of a small group of runners that included the eventual runner-up Matthew Orford of Lichfield RC and Carl Moulton of Boalloy RC. Orford and Pilsbury were shoulder to shoulder throughout the race and kept pushing right until the end when Pilsbury managed to pull away to cross the line in 55:47. Orford was six seconds behind, finishing second in 55:53. Carl Moulton was third in 56:12.

Outstanding running from Kelly Butler of Birchfield Harriers saw her become the winning female in 1:03:00, with a gap of almost seven minutes between her and Nia Rose Nokes of Stone MM who was second in 1:10:02. Nokes’ teammate Joanne Bentley was third in 1:10:58.

Congratulations to Carl and Nia who were first home for NSRRA.