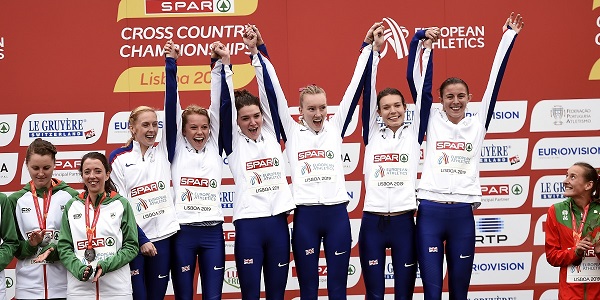 Five golds and a bronze from seven races was the happy return for the table-topping GB&NI team at the 26th European Cross Country Championships, although there were no British individual medals at aptly-named Parque de Bella Vista in Lisbon on Sunday (8 December).

The only title to change hands was the senior men's race, won by Robel Fsiha (Sweden) as holder Filip Ingebrigsten (Norway) laboured to 12th place. All the team races were reduced to three-to-score this year but this did not adversely affect the entries as more than 600 athletes were representing 40 countries and GB's full complement was 40-strong.

Just before the two senior races we enjoyed a fine display of teamwork in the mixed relay. GB won this event when it was introduced to the Euro Cross programme in Samorin, Slovakia two years ago but a fall by Jamie Williamson resulted in fourth place last year. This time there were no such issues as Sarah McDonald (Birchfield), James McMurray (St Albans), Alex Bell (Pudsey & Bramley) and Jonathan Davies (Reading) finished six seconds ahead of Belarus.

The Euro Cross includes development races for under-20 juniors and under-23 men and women. GB took gold in both junior races, though there was a scare when Italy were announced winners of the U20 women's race with the same points as GB. This was an error as Britain's third scorer had finished one place (and one second) ahead of Italy's third athlete, so take a bow Amelia Samuels (Wolverhampton, 12th) who secured gold with Izzy Fry (Newbury, 6th) and Saskia Millard (Herne Hill, 11th).