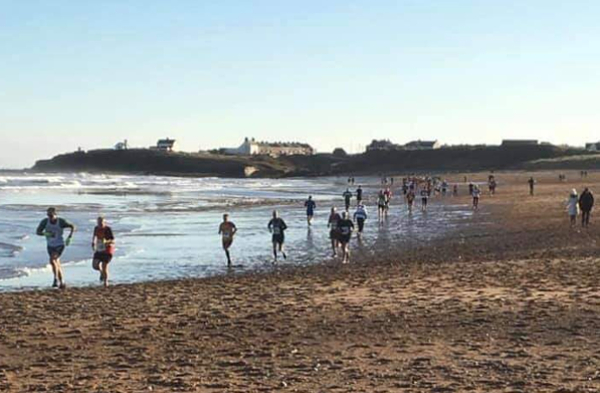 A record number of runners along with volunteers, organisers and officials kept the Blyth Sands Race (1 December) on a firm footing where there were diamond efforts by everyone involved at this 60th anniversary event.

The Blyth Sands Race has a long and proud history dating back to 1959 when a team of rowers challenged local runners to a 5 mile race along the beach at Blyth, Northumberland. The race continued since then, making it one of the oldest in the area.

Another interesting feature is the course itself which varies each day and changes every hour according to the tide. This means it can shift from a solid surface to one where there are exposed rocks requiring nifty footwork. In addition to this are the piers or ‘groynes’ and potentially deep water either side of them. Participants ran from Blyth to Seaton Sluice and back again in a well organised race, ably assisted by volunteers and marshals.

There was rock solid running by 177 finishers who enjoyed sherry, mince pies, tea and coffee at the lifeguard centre.