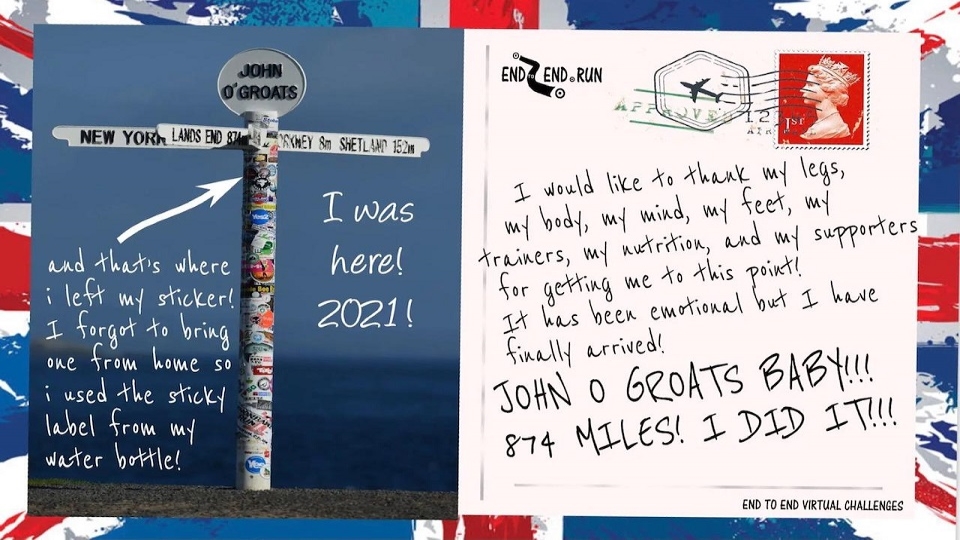 John o'Groats is under (virtual) siege!

It must be getting quite crowded at John o'Groats. The tiny Caithness village (pop. 300) is the target destination for 50,000 participants in the End to End Run and so far around 8,000 have completed their 874-mile journey from Lands End in Cornwall. Fortunately for “Groaters”, as the locals are called, this massive event is virtual so the influx of visitors isn't a problem.

End to End Run was conceived in Dorset on the kitchen table of married couple Nathan and Tori. And how their brainchild has grown in less than a year! Each month another intrepid band of virtual travellers sets off with hope and ambition to run further than ever before, some at great speed, others at a more sociable pace. Although End to End Run is a good test for all participants requiring (for example) almost 20 miles per week for a year to complete the journey.

It is estimated that around 75% of the participants use the challenges to raise vital funds for hard-pressed charities and that more than £1 million has been collected so far. The organisers themselves have also made significant donations to charities through their fighting hunger campaign, planting trees partners, and work for good charities.

LEJOG (as Lands End to John o'Groats is affectionately known) stands out from the crowd as the real event is one of the best known and revered endurance challenges in the UK. End to End virtual is priced at £29.99 and includes an epic T-shirt; bespoke medal; digital postcards en-route; personalised digital certificate; regular motivation from the race team and fellow competitors; a Hall of Fame appearance, plus an opportunity to win spot prizes from sponsors.

The real success of the venture has been the positive effect it's had on its entrants at such a challenging time, as Tori explained to runABC: “Since starting the first challenge during the lockdown from our kitchen table to help people stay motivated, we could have never predicted a year later we'd have over 50,000 people taking on the challenges.

“It's brought us so much joy and happiness knowing how we have helped so many people in such a short space of time. Receiving thank you emails from people who were once feeling suicidal to now having purpose and motivation or people who have been struggling mentally and physically who are now covering 10 miles a day and have lost half their body weight or have saved themselves from life-threatening diseases is overwhelming, to say the least.

“There have been many times reading emails we have burst into tears! We never thought our little idea could become so life-changing for people and us and we couldn't be more grateful to everyone who has taken part. We just hope we can continue making a difference to people's lives”.