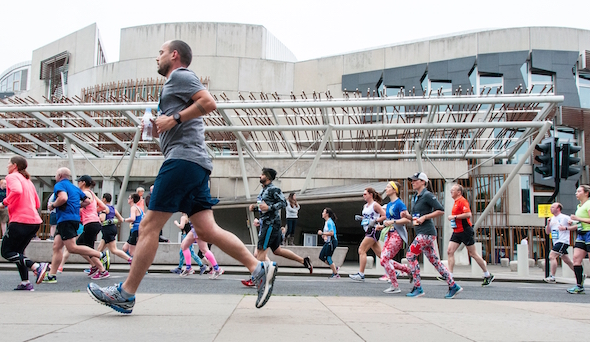 Resolve to Run Edinburgh in 2019

Runners who’ve decided to make running Edinburgh Marathon one of their New Year’s Resolutions don’t have long to commit.

Standard entries are close to capacity and are expected to close at midnight on Sunday, 6 January.

After standard entries close, runners will only be able to enter via a charity place, or choose to take part in the increasingly popular Edinburgh Half Marathon instead.

Second only to London in terms of size in the UK, Edinburgh Marathon has sold out every year since 2008. The 2019 edition of the event will take place on Sunday, 26 May 2019 and will attract thousands of runners from the UK and beyond.

One of the flattest and fastest marathons the UK has to offer, last year’s race saw the launch of a new route starting on Potterrow, the Old Town heartland of Edinburgh University.

From the new start, runners head North over the historic High Street and down The Mound, before streaming past the Scottish National Gallery and into Princes Street Gardens, with the iconic Edinburgh Castle as their backdrop.

The route then takes in the Scott Monument, before heading down the Royal Mile and towards Holyrood Park, the Scottish Parliament and Royal Palace. From there it’s eastwards towards the beautiful coast, and a welcome finish in Pinkie Playing Fields, Musselburgh.

The 2019 Edinburgh Marathon Festival will have nine races on offer, guaranteeing something for everyone from the seasoned runner to kids just starting out on their running journey.

The 10K, 5K and four junior races will be held on Saturday, 25 May at Holyrood Park.

Edinburgh Marathon, Edinburgh Half Marathon and the Team Relay will be run on Sunday, 26 May – all in the heart of Edinburgh.