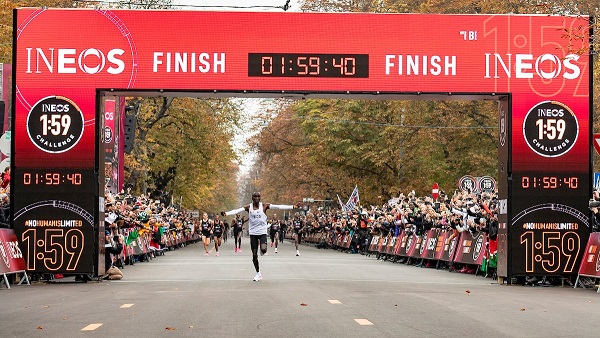 “I believe no human is limited”

“I believe no human is limited." Those were the words of world marathon record holder Eliud Kipchoge as he made history on the Prater Hauptallee in Vienna, Austria this morning (12 October) by becoming the first man to run the classic 26.2 miles marathon distance in less than two hours, recording 1:59:40.2!

The sight of Kipchoge sprinting the final 400m, free at last from his protective phalanx of pacemakers, was one of the most uplifting and exciting moments in athletics ever witnessed by runABC writer, Alan Newman.

This was dramatic street theatre played out before a rapturous crowd of 25,000 people, including a huge contingent of loyal fans who had made the same 8,500km journey from Kenya as the star of the show. One commentator eloquently described the event as being like: 'Swan Lake meets Chariots of Fire'. With pacemakers all dressed in black and Kipchoge serene in white you could appreciate the analogy.

The atmosphere was palpably electric and the coverage on the BBC red button superb as five years of planning finally came to fruition in the shadow of Vienna's Riesenrad – the 65 metre tall Ferris wheel opened in 1900 that held the title of world's tallest wheel from 1910 to 1985.

The pace was as metronomic as the turning of that famous attraction. All 42 kilometres were run in the range of 2:48 to 2:52 – apart from the final stretch when Kipchoge unleashed that astonishing burst of speed. At halfway he was 10 seconds ahead of schedule and his predicted finishing time was 1:59:50 but Kipchoge is a racer, not a robot, and had other ideas.

The balletic exchanges of teams of pacemakers, including all three Ingebrigtsen brothers from Norway and Kipchoge's great friend Bernard Lagat, added to the Swan Lake image but the final stretch was all raw power and emotion as Kipchoge burst clear to finish with a smile, beating his chest and pointing to the crowd before falling into the arms of his wife Grace – who was present to witness her husband race for the first time along with their three children.

This will not be a world record due to the many innovations used to minimise wind resistance, drinks being handed to the athlete and the more obvious fact that only one runner was ever going to complete the full distance but it was still a ground breaking moment that Kipchoge himself has compared to Neil Armstrong setting foot on the moon; Edmund Hillary and Tensin Norgay conquering Everest or Roger Bannister's sub-four-minute mile.

Thanks to modern technology Kipchoge's historic achievement was witnessed live by millions. What a way to spend a couple of hours on a Saturday morning!

Eliud Kipchoge – we salute you!