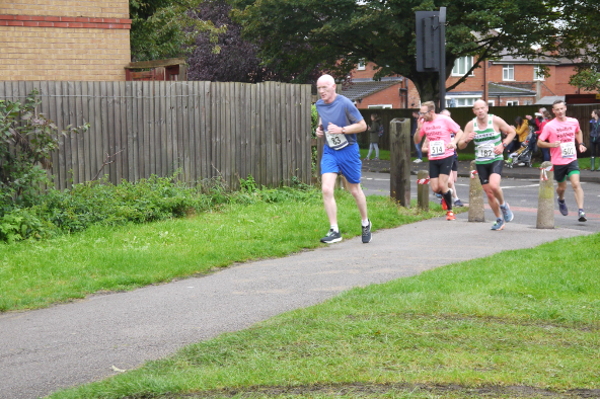 The team of Pink Pacers made a lasting impression at Sunday’s (6 October) Shelton Striders 10K. They were a highlight of a special race in memory of Andy Holden.

The Shelton Striders 10K was the penultimate event in the RunDerby Race Series which consistis of six races held between May and November. However, this year’s race was especially poignant as it paid tribute to a 'naturally awesome' man who sadly passed away from cancer in April this year.

Andy Holden was a 6ft 2 rugby player with a larger than life personality who gave generously of his time and skills on behalf of others. The husband of club chair Pascale, he supported her by volunteering at Shelton Strider events and became a stalwart of the local running community; always keen to help if someone was undertaking a challenge or adventure.

The 10K started at 9.45am followed by a 2 mile Fun Run at 11am. Runners in the 10K followed a fast and flat course with PB-potential and many of them achieved their target times thanks to a team of pacers in bright pink t-shirts. The Pink Pacers were professional from first to last and contributed to the friendly atmosphere at the race.

Alistair Campbell of Stroud & District AC was the winner in 33:38. Andy Harding of Belper Ten Twenty Triathlon Club was second in 34:01 with Aston Perrin of Long Eaton RC third in 34:57.

Shelton Striders RC are organising a special relay ‘Run for Andy’ on 9/10 November to honour their much-missed friend.