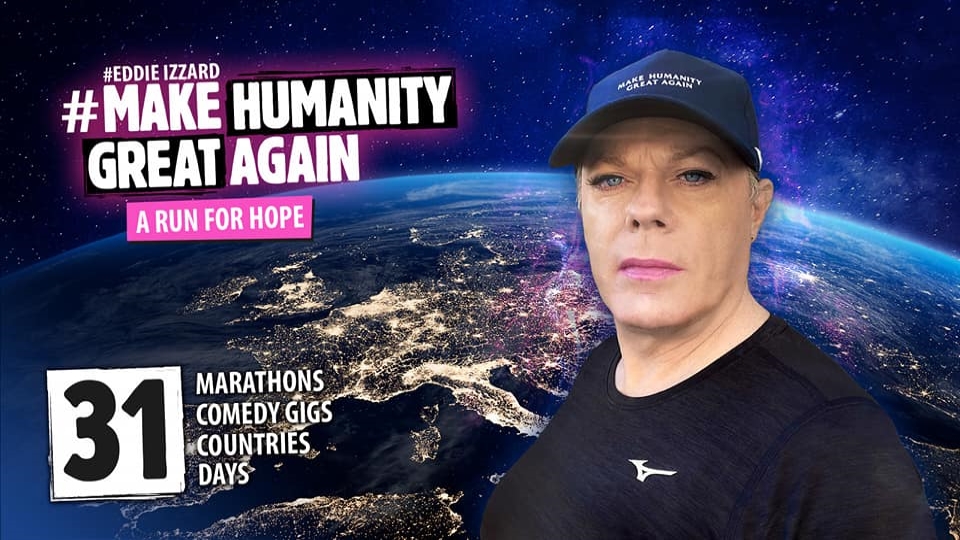 Eddie, who prefers the female gender pronoun and describes herself as 'gender-fluid', will take to the treadmill for a full marathon every single day in January, before live streaming a pay per view comedy show titled Eddie Izzard: Still Standing, featuring many of her greatest hits.

You can watch Eddie going through her paces daily at the Riverside Studios in Hammersmith, West London. Through the Zwift app, you can even run alongside Eddie in avatar form! The action starts online daily from 11:45am, followed by an hour-long comedy show with some of her best-known material from almost four decades in stand-up, remixed for 2021.

The ardent europhile and linguist will theme each run around a different European city and after the marathon in honour of Berlin on January 23 she will perform the show in German and on January 28 it will be broadcast in French to honour Paris.

Eddie may be a comic but is a serious runner, having completed 43 marathons in 51 days throughout the UK in 2009, raising £1.8million; 27 marathons in 27 days across South Africa as a tribute to Nelson Mandela in 2016, raising £2.6million for Sport Relief and 29 marathons in 29 days, one in each European capital, raising £140,000 last February.

Eddie's marathon campaign will raise money for various charities supporting disadvantaged and vulnerable people. On the campaign’s crowdfunding page, Eddie said: “Make Humanity Great Again stands for unity, the sharing of beliefs and the power of human beings uniting across the continents and around the world. As a campaign, it seeks to promote a fair chance in life for all, particularly those who experience disadvantage and discrimination”.

Eddie adds: "At a time of great separation, it is good to make even stronger connections than before, to work together, to be tolerant and make this a world where everyone has the right to have a fair chance in life."

Donations to Eddie's campaign can be made via Crowdfunder here