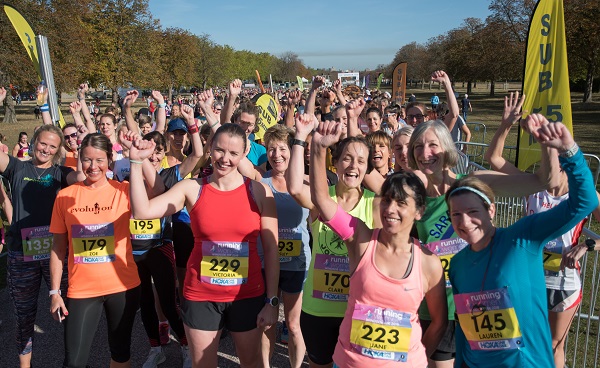 Early bird entries for one of Britain's biggest and best all-female road races close at midnight this Friday, 31 May. Race organisers, Running4Women, have announced that with over 1,000 places already claimed there are just a few days left to take advantage of the discounted entry for the Windsor Women's 10K on Saturday, 28 September 2019.

The 16th annual Running4Women Windsor Women's 10K, in the historic Royal Borough of Windsor in Berkshire, will once again start and finish in front of Windsor Castle, with the dramatic view down the Long Walk to the famous Royal residence being one of the highlights.

The current holder is W45 master Dawn Godwin (Windle Valley Runners, 41:05), who was among six women to record a memorable victory over 2014 European 10,000m champion Jo Pavey MBE, the event ambassador and official starter who simply couldn't resist joining in!

Last year there were 1,276 finishers in just over two hours and nearly 350 women broke the 60-minute barrier on the undulating course. This must be one of the fastest growing races in the nation as just two years ago there were only 620 finishers in 2:15:30.

The organisers are excited to announce that after being amazed by the fantastic atmosphere and support at last year’s race, Jo Pavey will be back to not only start the race but once again to complete the course alongside the runners. Mother-of-two Jo turns 46 in September and is aiming for an unprecedented sixth Olympics in Tokyo 2020!

Jo said: “The positivity surrounding last year’s event was astounding and I just had to be part of it again. There’s something special about this event; the beautiful scenery of the course winding through Windsor Great Park, the overwhelming support from friends and family and the passion of every runner to promote women’s running and cheer each other on as much as possible.”

Joanne from Running4Women added: “This is a 10k for women of all abilities and everyone is treated the same, whether this is your first race or you are a seasoned 'veteran', whether you finish at the front of the race or at the back - you are all winners!”

Once runners have crossed the finish line, Jo Pavey, who is an ambassador of the official sportswear partner Saucony, will be presenting awards and chatting with runners and spectators in the Running4Women marquee.

Don’t forget you can sign up as a mother and daughter team in the Generation Game, where prizes will be awarded for the first team to finish in the lowest aggregate time.