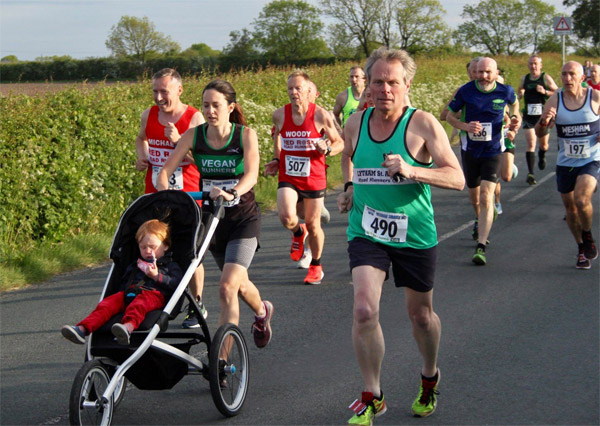 Last Wednesday's (22 May) Wesham Summer 10K was the scene of a world record attempt. The popular Lancashire midweek race drew a field of 400 and saw a good contest at the head of affairs between Robert Danson (31:09) and Ben Fish (31:16). However it was the performance of Jo Armitage that generated most interest.

Jo had targeted the Wesham race for an attempt on the Guinness world record for a 10K with a single buggy. Her partner for the record attempt was 2-year-old son Arthur who enjoys his buggy runs and is normally a happy passenger.

Jo is a previous world record holder having set the time for 10k with a double buggy (when daughter Elma was on the team) last year. However when that record was subsequently broken Jo looked around for a new challenge and settled on a 10k single buggy effort. The current Guinness World Record – fastest 10K pushing a pram (female) – stood at 43:07 by Allison Tan of Canada from 2012.

Enlisting the support of Wesham 10K race director Steve Gore, Jo 'recced' the route and on her practice run found the course more undulating than anticipated, with a few twists and turns, so she wasn't feeling too confident about her chances.

On a more positive note she thought it was a surprisingly quick course, all on quiet roads and with no kerbs to negotiate, which is important for buggy running.

The evening of 22 May saw good conditions – 14 degrees, dry, and a light wind which was key to Jo's record attempt, as in buggy running wind can slow your speed down dramatically. There was one problem though, Arthur Arthur was not a willing race participant."

Jo explains: "Arthur usually enjoys buggy-running but he didn't want to go in it on the night! I had to try to entertain and settle him for the first half of the race by talking to him, giving him snacks, and pointing out things on the route. I also slowed down at the water station to get him a water bottle to play with – something I hadn't planned to do and which cost a bit of time."

Having dealt with this issue Jo got back to concentrating on the record effort: "The last couple of miles involved the most twists and turns and a bit of uphill so that was the hardest bit in terms of endurance. It was helpful that I had done the reccy of the course so knew to anticipate that and push through it."

Meanwhile at the finish line race director Steve was waiting expectantly: "I didn't get a chance to speak to Jo pre-race but I saw zoom off with the front of the pack of the first 50 or so runners. At the finish I heard one of our marshals shouting that she was approaching and then I saw her. She was charging towards the line. Quick glance of the clock and I remember turning and saying she's going to do it. And she did. Smashed the record by 35 seconds! 81st and a time of 42:32."

Post-race Jo expressed delight at her success: "I couldn't really believe I'd done it at the end. I was really buzzing!"

During the winners' presentation Lee Barlow, chairman of race organisers Wesham Road Runners congratulated Jo on her achievement to cheers and applause and presented her with a bottle of champagne.

runABC North asked Jo about the motivation behind her world record attempt. She said: "I have become faster since becoming a mum and going vegan. I love it when I am seen running with a buggy and can challenge stereotypes of women, mums and vegans all at the same time!"

Check out details of Wesham Road Runners events at the club website.