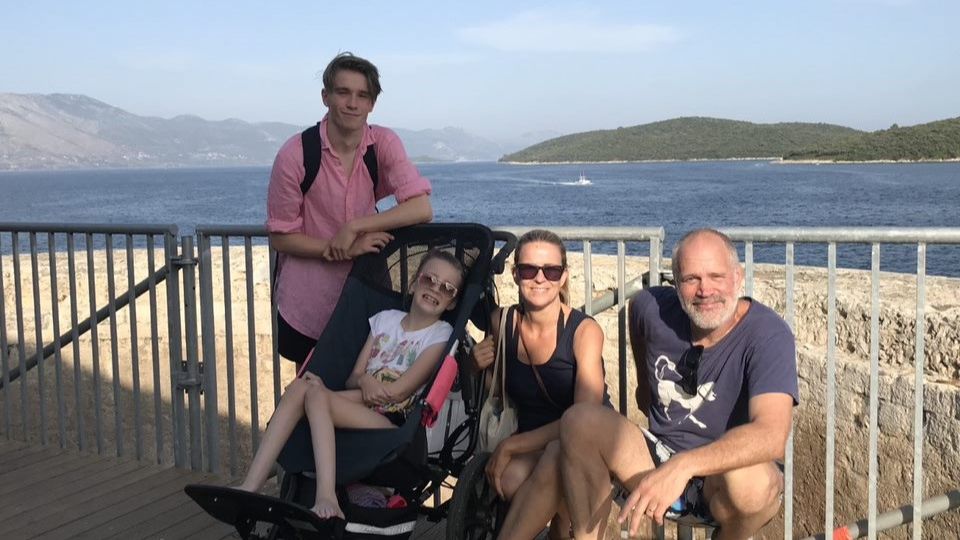 Former soldier is in a race against time for Aggie

Darren Hardy is in a race against time, just like Aggie Candy-Waters (12), pictured with her family. Aggie has the world's rarest children's disease – Hypomyelination with Atrophy of Basal Ganglia and Cerebellum (H-abc) – and is rapidly losing her fine motor skills. This means she is fed, dressed, and carried by her parents; is permanently in a wheelchair, and is losing her ability to speak.

Darren was moved to tears when he heard about Aggie's plight and the former soldier, who lives in Fleet, quickly decided on his battle plan to help. The 35-year-old father of two is a double Warrior Games gold medallist and record-breaker who completed numerous extreme sports challenges for charity in 2020, raising £24,000.

His latest challenge is to complete five marathons within 50 hours without sleeping, carrying everything he needs from his fuel provided by Resilient Nutrition to water, wet kit, warm kit, and first aid kit in an Osprey lightweight backpack, calling on his sleep deprivation training from the military to stay awake. He will start his '5 in 50' challenge in Poole at 8:00am on Friday (9th April) and run along the coast to Abbotsbury, before turning back to Poole.

On the eve of his charitable quest, Darren told runABC South: “As a family man myself, I was inspired by Aggie’s story. The thought of what this will mean for Aggie and her family will really help keep the legs going across the 50 hours. Coming into a challenge like this you know it's going to be tough, but that’s what it’s all about – pushing your body and testing its limits.”

There are only 200 children in the world like Aggie and most are diagnosed around the age of three or four, when their parents notice that their development is slower than other children. But, there is new hope. Doctors at the Children’s Hospital of Philadelphia have made a huge breakthrough. New gene therapy that slows down the disease in mice could help save Aggie, and children like her. They need £1million for human trials to begin and Darren has set up a JustGiving fundraising page, with £5,000 already pledged. Every penny counts!

Ali Candy-Waters, Aggie’s mum, said: “H-abc is the world’s rarest brain disease. People simply haven’t heard of it, so in our darkest moments, we wonder if we can ever get to our £1m target in time. Then we hear from someone like Darren, and we feel like there could be a chance.”

Darren would like to thank Resilient Nutrition and Osprey for their support in making this challenge possible. You can follow his progress on his Instagram feed: @Darren_hardy4