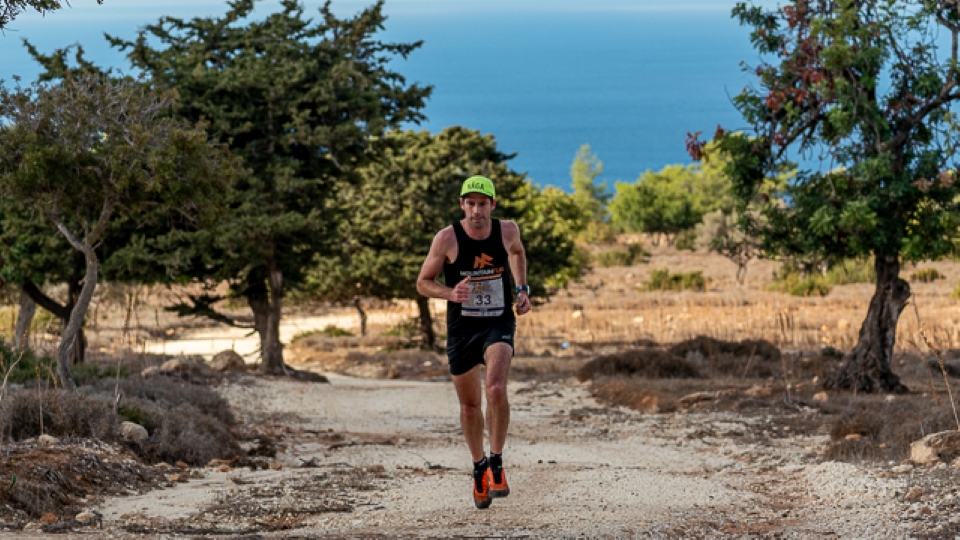 Does the idea of escaping to the sunshine for a running tour keep creeping into your head during these dull days of winter? It certainly did for more than 200 Brits who migrated south for the 2021 Cyprus International 4-Day Challenge between 25-28 November. The tour is organised by 2:09 Events who are based in Farnborough and run by Mike Gratton, the 1983 London Marathon winner in the time that now forms the company name.

The event is hosted in southern Cyprus by Arena Sports and the four-day programme starts with a 6K Time Trial from the event base at the luxurious Coral Beach Hotel and Resort. Runners set off at 10-second intervals on the beachfront and finish beside the spectacular wreck of the 2,517 tons Edro III cargo ship that ran aground here on 8 December 2011.

The tour then heads into the wilds of the Akamas Nature Reserve Park for an 11K hill climb near Avakas Gorge followed by the Akamas Half Marathon multi-terrain race from St Minas Church in the centre of Neo Chorio village.

Finally, the tour concludes with the AIMS and World Athletics approved Paphos City 10K race, followed by a Gala Dinner and Awards Ceremony back at the Coral Bay Hotel and Resort.

Northern Ireland's Aaron Woodman (Royal Army PTC/Willowfield, 2:56:09) was his nearest challenger over the full 48K distance, although he was beaten by Germany's Balthasar Larisch (Rambo Junior Soft Whipp, 3:02:21) by 15 seconds in the opening time trial. Daz Farrugia (RAPTC/Colchester Harriers) was fourth and third Brit in 3:10:04.

Next year's Cyprus International 4-Day Challenge is scheduled for 24-27 November 2022 and this writer for one is already interested. Freezing conditions in Britain or the sunshine in Cyprus? There can only be one winner!

This film of the 2018 tour gives you a good idea of what to expect: