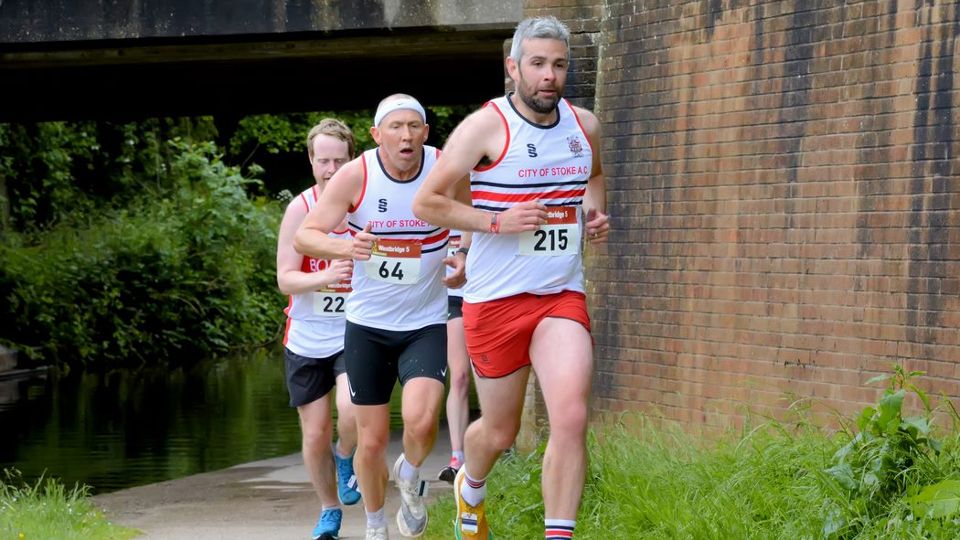 They were in commanding form at this multi-terrain 5 miler.

There were winning performances from City of Stoke AC men’s and women’s teams at a very wet Westbridge 5 (Sunday 5 June). Their achievements ended the Platinum Jubilee weekend on a high note despite the soggy conditions.

After three days of warm, sunny weather our changeable climate lived up to its reputation with thunderstorms and rain across the country on the final day of the bank holiday weekend.

However, we British are nothing if not stoic as evidenced at Sunday’s event. Nearly 200 runners powered their way around a squelchy multi-terrain course at Race 8 in the NSRRA league programme for 2022. A well organised event from Race Director Martin Cross and Stone Master Marathoners (Stone MM), it has a bit of everything in regard to terrain – grass, towpath, footpath, track and country lanes, and the lack of elevation makes it suitable for all abilities.

At 9.30am, runners streamed away from the start onto a muddy, waterlogged field for the first mile. They exited this to loop past the start then continued along the canal towards Aston: they turned here and picked up the canal towpath once more before a last dash up a short incline and through the finish line. Marshals clapped and encouraged everyone around the course, doing a sterling job in those conditions.

Vale Royal AC’s Andrew Miles was the winner in 25:30, closely followed by Lee Gratton of Rugeley Runners in 25:34. Carl Moulton of Boalloy RC was third in 26:39.

The complete set of results can be found via the runABC Midlands Race Listings page.

There were bottles of wine for the top three men and women, age group winners and winning men’s and women’s teams.

Every finisher received a bottle of beer or a cone of sweets for those wanting a non-alcoholic memento and a bottle of water.

Here’s hoping next year’s race will be dry but, if not, just pack a snorkel ;-)