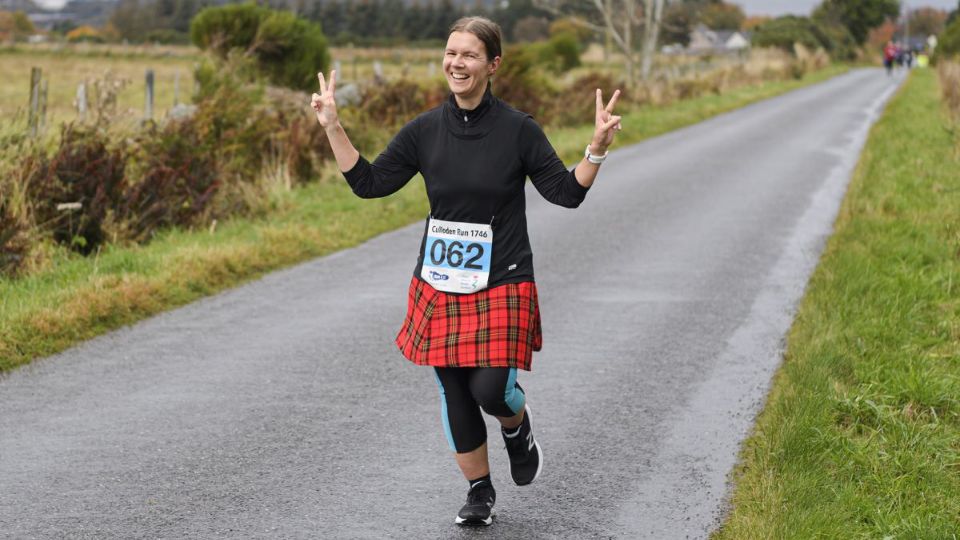 Runners from as far away as Germany and the United States joined the Chest, Heart & Stroke Scotland clan to battle their way through the Virtual Culloden Run on Sunday.

Their challenge was to run 10km, 17.46km or any other distance of their choosing, inspired by a significant date in Scottish history.

He said, “We had over 80 runners taking part, some of whom had transferred from the ‘real’ event after it was cancelled and others who signed up after it went virtual.”

Converting a ‘real life’ event into a ‘virtual’ one is no easy task, but it’s one Middleton and his team have become used to. The charity’s popular Glenlivet 10K and Aviemore 100 cycle both went virtual earlier this year.

Middleton said, “The best thing about a virtual event isn’t so much what the participants are doing, but the interaction between them. It’s wonderful to see them on our Strava and Facebook groups sharing photos and running routes, and helping to support each other.”

He added, “In terms of us supporting them, we offered our participants many of the same things they’d have expected in the ‘real’ event, like race numbers, T-shirts and sample 10km or 17.46km routes.

“Culloden gave us the chance to implement what we learned from our other virtual events and people really enjoyed it.”

Middleton now has the difficult task of judging the event’s photo competition, set on the theme of ‘What Scotland Means to You’.

He said, “We’ve had lots of photos in already, and lots of tartan, kilts, historic locations and ruined castles. One runner submitted images from his run around the historic sites of Edinburgh. It’ll be a horrific task to choose the best!”

Entries are still open and the winner of the competition will be revealed on 16 November.

While Middleton was proud of all the runners who took part in the event, he told us that the team of runners from Dr Gray’s Hospital in Elgin deserved special mention. The group of 30 doctors and nurses from different hospital departments set themselves a target of raising £1746 for CHSS by running 1746 km in the space of a week.

As Middleton explained, “They told us they encounter patients every day across the hospital, but especially in the emergency department, with the majority related to chest, heart and stroke. They believed that the charity is vital for many of those patients and wanted to support us in whatever way they could."

In the end, the team smashed their target, raising £3415 for CHSS: a good chunk a total fundraising pot that stands at £6510 and rising.

With no more events scheduled for the rest of the year, the CHSS events team will now be getting down to the difficult task of trying to plan their 2021 fundraising calendar.

Middleton is quietly optimistic about the year to come. He said: “At the start of the pandemic, it was very difficult. Our fundraising stopped, our staff were furloughed, and all our shops had to close. During lockdown, we were losing £500,000 of income a month. Yet given the nature of COVID, demand for our services probably doubled. It was a recipe for disaster. Without our amazing fundraisers and supporters, some of these services would have been forced to close.

“But with their help over the last few months, things have evened out a bit. Hopefully better times are on the horizon.”

But better times don’t mean easy times, and like many charities, CHSS still needs people to raise funds for them – and, more specifically, ‘to ensure that Chest, Heart & Stroke Scotland is still there for the people who need them the most right now, and in the future.’

As Middleton says, “We’re always keen to hear from people who’d like to support CHSS, through any type of personal challenge. Whether you’re interested in running or climbing or any other activity you can think of to fundraise for us, please get in touch so that we can give you the support you deserve in supporting us.”