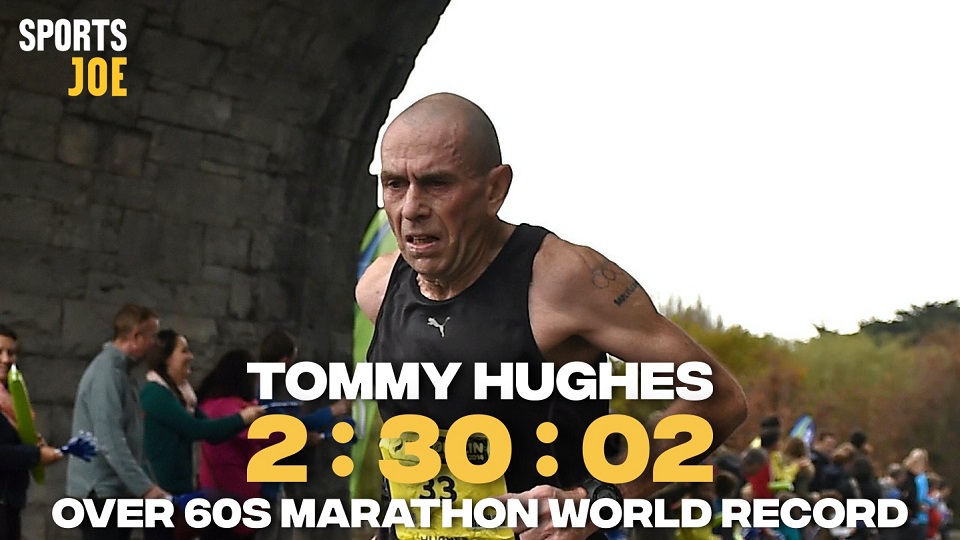 Thomas Joseph Hughes, representing Ireland, was 72nd in the 1992 Barcelona Olympic Marathon in 2:32:55. On Sunday 25 October at Down Royal Racecourse near Lisburn in Northern Ireland, Tommy Hughes ran faster than his 32-year-old Olympian self to smash the world M60 record for the marathon with an utterly breathtaking 2:30:02.

Running for the appropriately named Strive Racing Club that he started himself, Tommy had to battle with strong winds and tough COVID-19 restrictions, tightened in Northern Ireland since 16 October, to achieve his goal of improving Yoshihisa Hosaka's time of 2:36:30 set in Beppu, Japan in 2009.

Down Royal Racecourse has been a venue for horse racing for more than 200 years. The most valuable race there is the Ladbrokes Champion Chase, run at the Northern Ireland Festival of Racing in November. The most valuable flat race run there annually is the Ulster Derby.

The perimeter road provided the 14-lap course for a tiny field of seven athletes, restricted in size due to COVID-19 regulations. Tommy Hughes, from County Derry, shared the pace with Colin Heron as the leading pair passed 10 miles in 56:44 and halfway in 1:14:32, on target for sub-2:30. Tommy had a slight lead at 20 miles (1:54:07) and extended that to 48 seconds as he took the Down Royal Marathon title in 2:30:02, taking more than six minutes off the M60 world record in the process.

Last month, as reported in runABC online Hughes recorded an M60 world best (1:11:09) in the Antrim Coast Half Marathon. The previous mark had been held by Austria's Heinz Steiner (1:17:28) since 2006. And last year, together with his son Eoin Hughes, Tommy ran 2:27:52 aged 59 at Frankfurt Marathon for a combined time (4:59:22) that was the fastest ever by a father-son duo in a marathon and a Guinness World Record!

Tommy Hughes certainly has made the most of this strangest of years since he turned 60 in January, despite being denied the opportunity to race in the World Masters Championships in Canada in August, cancelled as a consequence of the Covid-19 pandemic. His punishing training regime includes 100 miles every week, running twice a day, using local 5k and 10k races as speedwork.