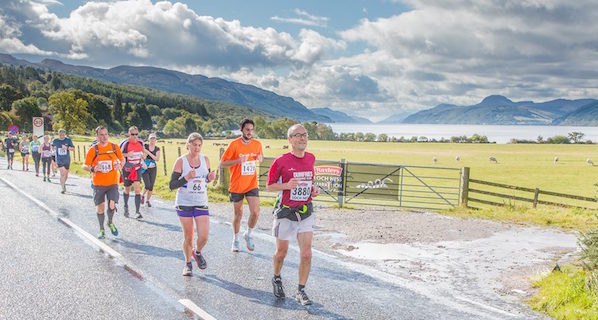 'Under Pressure', or how Freddie Mercury saved my marathon

There comes a time when every marathoner needs something else – something more, something different – to get them through to the taper.

In the past, that job has been done for me by eating crunchy peanut butter straight out of the jar. But this time, both my waistline and I needed a plan B.

Training over the summer for October’s Baxters Loch Ness Marathon was hard. Temperatures of 30+ degrees wherever I seemed to be – plus the necessity of keeping the kids amused – made consistent training a challenge.

But when life returned to normal towards the end of August and I looked at my carefully planned training programme to see zeros where my mileage notes should have been, I had to find something to help me pick up the pace – literally.

So, I resorted to what teenagers have done for generations to distract them from any real work that has to be done: I cranked up the tunes.

As I don’t normally listen to music while I run, finding the right kind was harder than I thought.

Dance music pushed me into a pace my old bones couldn’t sustain without several Red Bulls; classical took me into an isolated, elegant world of my own – one that wasn’t much use when the real world was full of traffic and potholes; Spotify playlists were just too patchy, with tempos all over the place and too many songs I didn’t like bursting the tyres of my momentum.

Desperate for advice, I turned to my own teenagers, who, no doubt having a joke at my expense, suggested their aged mother try classic rock.

And that was it. I powered down country lanes to The Who, did mile reps to Fleetwood Mac and stormed up hills to the Rolling Stones – all music that was old even when I was young.

But in the end, what really pushed me through that fortnight of high-mileage hell before the start of this week’s taper was the energy, power and propulsion of the music of Queen. ‘Travelling at the speed of light?’ Yup, that’s me.

Come Marathon day, I won’t be listening to any actual Queen tunes. Not only is the use of my earbud-style headphones against Scottish and UK Athletics rules, but for me, it’s very important to be able to engage with the sounds of the race itself – to give, and take, encouragement along the way.

But I’ve committed my power playlist to memory, beat for beat, to help focus my mind.

I’ve even adapted some of the lyrics into personal mantras to keep me going when the going gets tough.

As I knock off mile after mile on the long, flat sections between miles 10 and 17, I’ll be settling into a solid stride with the help of my own lyrical remix of ‘Another One Bites the Dust’.

I’ll plan on powering up the very inconveniently placed hill at Dores to the relentless beat of ‘We Will Rock You’, the famous dum-dum-clap, dum-dum-clap that pushes the whole of the song’s two minutes along, set to repeat in my head until I get to the top.

And when the finish line seems an eternity away at mile 25, I’ll propel myself towards it to the sheer desire and urgency of ‘I Want it All’.

When I’ve crossed it, well, the gleeful, gloating chorus of ‘We Are The Champions’ will flood my brain along with the endorphins.

So if you’re running or spectating at this year's Loch Ness Marathon and you see a middle-aged woman out on the course playing air guitar like she’s Bryan May on the roof of Buckingham Palace at the (real) Queen’s Diamond Jubilee, that’ll be me.

Oh, but Don’t Stop Me Now: I’ll be having such a good time. In fact, I'll be having a ball.