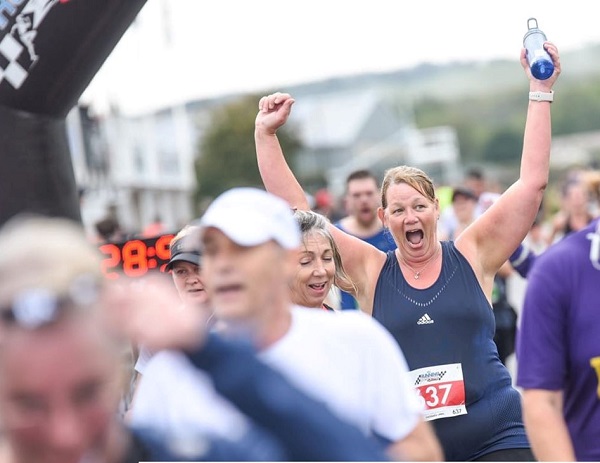 They lap it up at Running Grand Prix Goodwood

Racing leathers were replaced by lycra, and energy gels substituted for high octane fuel as 750 runners put in some fast laps at historic Goodwood Motor Circuit in the Running Grand Prix at Goodwood on Sunday (22 September).

This autumn classic is attracting a loyal following with its winning formula of five racing distances from 5K to full marathon, which all started on the grid of the iconic home of British motor racing nestled at the foot of the Sussex Downs.

Our photo star Liz Graham (#637) looks turbo charged for the 5K. This one lap race was preceded by the marathon, half marathon, 20 miles and 10K events that were all held entirely within the famous race circuit – flat, fast and PB conducive.

The 10K was the most popular event, with 314 finishers in 1:44:47. Peter Heckles (Exeter Harriers, 36:38) and Farran Leach (Eastbourne Rovers, 40:18) were the ones whose racing lines were being studied closely by the trailing opposition.

Finally the 5K roared off the line to complete the programme. Ethan Fincham (Team Synergy, 16:52) and Shannon Hopkins-Parry (Hastings, 20:00) were the first to see the chequered flag.

Race organisation was in the capable hands of RunThrough events