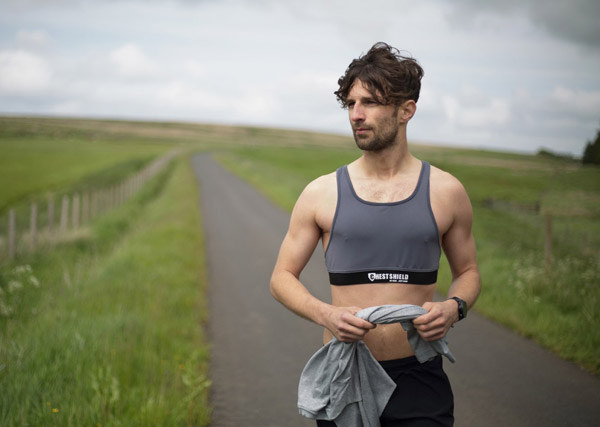 As we enter spring marathon season (hopefully!), runners aim to avoid any minor issues (things like gel reaction or blisters) than can flair up to cause real problems or discomfort. One issue that might seem innocuous is nipple chafing, (nipple rub, vest rub or whatever you want to call it) but it can be a real problem for male runners. Where there is sweat, physical activity or inclement weather there is the probability there will be friction on one of the most sensitive parts of a man’s body – the nipples.

We asked ourselves a simple question. How to prevent chafed nipples while doing exercise?

Not only can nipple chafing spoil your sport or activity it can be very painful for days to come, hindering future sporting activities. This is something ChestShield founder Paul Burningham had issues with during his running sessions. During training runs and races nipple rub was always an issue, no matter what distance or what type of T-shirt was worn. There were various products out there that were meant to stop this, including ‘taping-up’ but they never really worked for Paul.

Nipple sprays and nipple guards were clumsy and often came off or wore off as the intensity of exercise increased or if there was inclement weather. Wearing a base layer didn’t work either as the fabric used was too thin. In warmer weather a full base layer is the last thing you want to put on. There had to be an alternative, right? No, there wasn’t!

In 2014, ChestShield as a concept was born. The idea was to have a men’s ‘crop top’ styled garment that not only stops nipple rub but adds chest compression and support while exercising.

After many prototypes and testing different weights of fabric, we have come up with, what we think is a great solution to the age old problem of nipple rub for men: ChestShield.

The ChestShield is slightly thicker but has all the benefits of a compression top. The material used is a modern, technical, moisture wicking fabric that draws moisture away from the body. Being in a crop top style, it’s far lighter and less restrictive than a compression top, offering you far greater freedom when carrying out your chosen sport or activity.

After a lengthy testing and trialling the concept has become a reality. The ChestShield is our solution for men that suffer from nipple rub, whatever the sport, answering the initial question of – how to prevent chafed nipples while during exercise?

Could it work for you?

Previous & Next Service of the Week