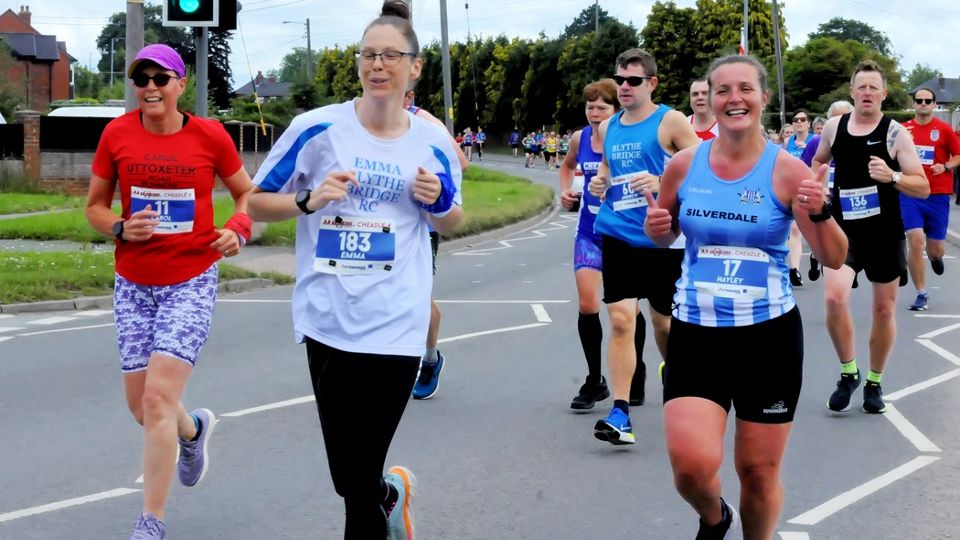 On the up again at the Cheadle 4

This was the first live NSRRA race in more than a year.

There was a lively atmosphere at Sunday’s (11 July) Cheadle 4 as runners showed their delight at being able to race again with like minded others. There were a few changes due to Covid-19 but the one thing that hadn’t altered was the big hill at halfway!

A well organised event from Cheadle Running Club and race number 9 in the NSRRA programme, it attracted a good mix of runners from local clubs who tested themselves on this challenging course. Many of those taking part were looking to pick up points – which also means prizes in this competitive league.

NSRRA had held a series of virtual races during the pandemic which have acted as a focus and motivator with great success. However, nothing beats the buzz and camaraderie at a real race as Sunday showed, along with the opportunity to meet up with fellow runners. Something that was sorely missed during the lockdowns and restrictions.

The race started and finished at Tean Road Recreation Ground in Cheadle. Runners were set off in two waves and continued on local roads that included a tough climb at mile 2 or ‘Le Col du Freehay’ as it was nicknamed. Something to get the teeth into... that was followed by a downhill stretch to the finish.

Matthew Costello of Shrewsbury AC was the winner in 21:19. Carl Moulton of Boalloy RC was second in 22:01 with teammate Ashley Maughan third in 22:16.

Louise Hackett of Wolverhampton & Bilston AC was the winning female in 23:18. Amanda Kelly of Stoke FIT was second in 26:32 and Michelle Buckle of Silverdale RC third in 26:33.

All the results can be viewed at the RunABC Midlands Race Listings page.