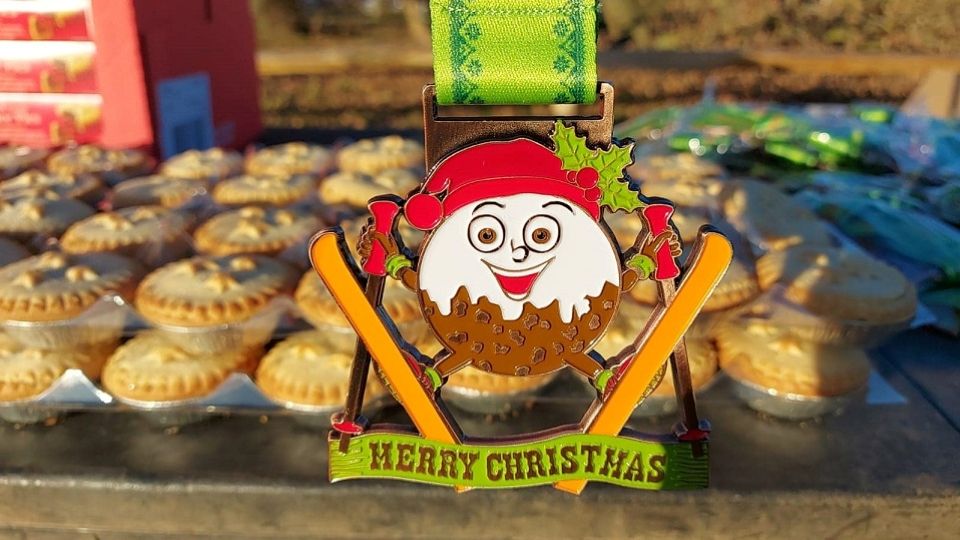 We simply couldn't resist sharing the smiley-faced, skiing Santa medal handed out at the Bushy Park Christmas 10K and 5K races on Sunday (28 November). The mountain of mince pies in the background looks pretty tempting, too!

Yes, it's that time of year folks. Less than a month to go before we'll be trying out those super-fast racing shoes and other must-have Christmas gifts for runners. And runABC South can no longer ignore the fact that Christmas is just around the corner and festive fun is oozing from the very pores of race organisers like Nice Work

Sunday's races were held in bright, sunny but freezing conditions in London's second-largest Royal Park, while former Nice Work owners Martin and Kathy Burke were enjoying their retirement in the warmth at the Cyprus Challenge races on the lovely Mediterranean island.

Back to chilly London for a review of the leading results. The 10K race had 121 finishers in 1:44:25 and no threats to the impressive course records held by Paolo Natali (32:25) and Emma Pallant (34:29). The tracks, trails, and footpaths through the original home of parkrun were covered by race winner Samuel Saxon in 37:18. Sam's a Bushy parkrunner, with a best of 17:36 set in the previous Saturday's event.

The men's prizewinners included runners-up Michael Wylie (Reigate Priory AC, 37:29) and Daniel Werchola (38:14), with awards generously sponsored by Sporting Feet who have stores nearby in Putney and Richmond.

Naturally, there were festive finish line goodies and a special prize was presented to the best dressed to impress Santa!

Results can be viewed via runABC South race listing here