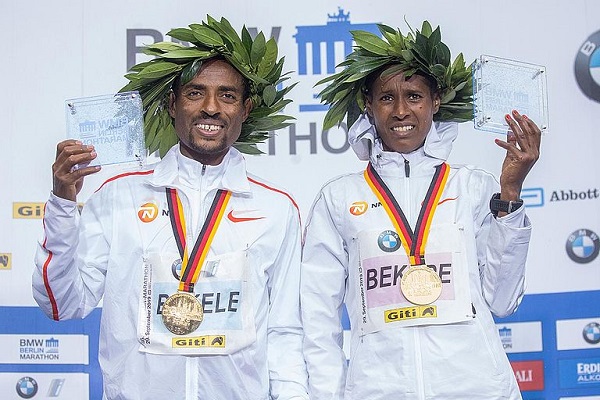 In the event the battle-hardened 37-year-old Ethiopian rolled back the years after an injury ravaged period following winning this title in 2016, to miss Kipchoge's incredible time by two seconds, despite looking defeated and falling a minute behind fellow Ethiopians Birhanu Legese and Sisay Lemma at the 30K mark.

Earlier the race had been vintage Bekele, as he confidently towed the field through halfway in 61:05 – a second ahead of Kipchoge's world record schedule. Suddenly the 2016 champion (in 2:03:03) appeared to slow and he drifted back as Legese began to dominate the closing stages.

As Lemma faded, so Bekele revived and in one of the most astonishing comebacks in marathon history he produced a 60:36 second half to pass both rivals before powering through the iconic Brandenburg Gate in the second fastest ever time (2:01:41). Legese (2:02:48) became the third quickest marathoner in history and Lemma hung on for a world class PB (2:03:36).

Surely, the uneven pace of this race shows that Bekele has the record in his locker? What price a head-to-head with Kipchoge, while both are still at their peak, to see if the sub-two really is possible in full race conditions?

Our reporter's punditry extended to tipping defending champion Gladys Cherono (Kenya) to retain her title and this looked a better bet than Bekele in the men's race until she stopped in some distress at 30K, clearing the way for a duel between Ethiopians Ashete Bekere 2:20:14) and the diminutive Mare Dibaba (2:20:21). Kenya's Sally Chepyego (2:21:06) was third.